Netflix: The Company That Can’t Be Beat

Netflix (NFLX) delivered its earnings tonight, kicking off the so-called “earnings season”. The company has always been on my watchlist, just because I like the service they offer, but I think that the overall stock is volatile.

Netflix became a public company in 2010, sitting at the ripe stock price of $175.70, a 200% increase from where the stock previously was. This was a golden year, with revenue increasing by almost a third, and income almost doubling to $161 million dollars.

In 2011, NFLX continued this upward trajectory, creating both profits for the customer and the company. At the peak of everything, shares were trading for almost $300, an insane amount and definite overvaluation.

After this July peak, things began to simmer down for the company, as they increased prices which resulting in dissatisfied customers and an overall loss of subscribers. The stock price plummeted down to $130.

Since then, NFLX has doubled in many different arenas. They are currently exploring original programming, and have been nominated for multiple Emmy’s. They plan to spend $5 billion this year on original content, according to an article on Fast Company.

But everyone else is spending millions on content as well. There are many different TV shows, but there aren’t a surplus of viewers – there are only so many hours in the day, after all.

BUT, NFLX is winning at the game. They are reaching into international markets, and completely blew past Wall Street Estimates for subscriber growth in those markets. Even in domestic markets, NFLX performed incredibly, as shown in the graph below (credits to Bloomberg) 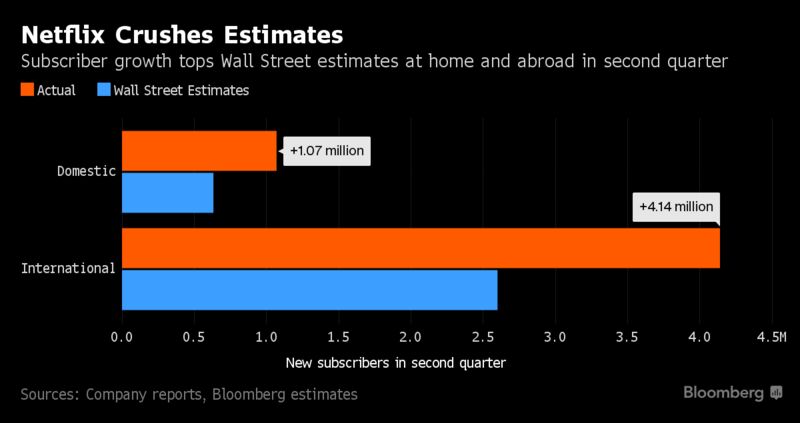 NFLX has a huge array of TV shows and content, and all the countries in the world are “feeling it” per say. Instinet says that at least 20% of broadband households outside the US will be using the streaming service. That’s 64.2 million people. That’s 16x the population of Kentucky. That’s HUGE.

And not only are they going to reach these broad markets, they are going to do it quickly. They added 5.2 million subscribers in one quarter, in 3 months, 25% more than what estimates were.

The stock is already up 31% for the year. They soared by 9.3% in this quarter alone. Basically, everywhere you turn, everything is growing insanely quickly and surpassing all estimates.

BUT, the net income of the company is suffering. They aren’t making too much on the dollar, but their growth and revenue is stellar.

They are doing all the right things.

Allowing for new programming and different specials to capture the fleeting interest of the ever-distracted American.

NFLX seems like a winner. It bounced past any expectations that experts had. And it continues to do so. I wouldn’t mark it as a buy quite yet, just because I don’t like the volatility of the stock!

I think that it might be slightly overvalued, just due to the “catch and ride the wave” ideology that surrounds the unicorns like this.

It’s a great company and a great stock right now. Let’s see how the rest of earnings season rolls out.