Recently, the country of Venezuela has made headlines. The country is on the brink of a civil war, facing massive inflation, a corrupt government, and a population that is comprised of 80% living below the poverty line.

The country is going through a financial crisis, with inflation jumping 741% from February 2016 to February 2017, according to TradingEconomics.com. So something that costed you 1 bolivar (the Venezuelan currency) now costs 741 bolivars.

That wouldn’t be a problem if the income increased exponentially with it, but income growth, if anything, has decreased. Average wages are right around $1,881 bolivar a month, which converts to about $184.36 USD a month (explaining why 80% of citizens live in poverty)

The government is taking over plants and operations owned by foreign companies, in an attempt to nationalize private assets. It is almost impossible to do business in Venezuela because the currency is so devalued, and big corporations with big money are leaving because of it. Ford left, GM and Chevron are considering, and absolutely no new companies are moving in.

How did Venezuela end up in such a state? In the early 2000’s, it was in the hands of Hugo Chavez (himself who is controversial), with the richest oil reserves in the world and a beautiful land that attracted hoards of tourists. They saw improvements in areas such as poverty, literacy, income equality, and quality of life.

Income inequality (measured by the Gini Coefficient) dropped from 0.495 in 1998 to 0.39 in 2011, which bumped Venezuela up to #2 in Income Equality in the Western Hemisphere (behind only Canada). That’s an impressive feat in itself.

The poverty rate dropped 15%, in 12 years, according to the NIE.

Except, the main thing that all traders know is to DIVERSIFY YOUR ASSETS. Chavez was heavily relying on oil revenues to keep the country afloat. There wasn’t much else that he was using government spending on, besides assistance programs for the citizens and other quality of life matters. Oil was #1.

And that was the biggest mistake.

Hugo Chavez died on 5 March 2013. Nicolas Maduro stepped up, and was officially inaugurated in 19 April 2013 with 50.62% of the votes. He kept up the same regime that Chavez had, but the price of oil didn’t cooperate.

When oil prices collapsed in early 2014, so did Venezuela’s economy. 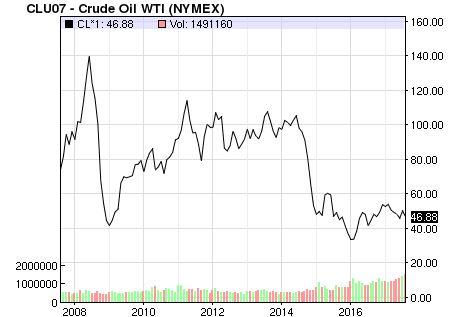 Venezuela was faced with a declining socioeconomic status, crime inflation, poverty, shortages, and decreased living standards. All of those were met by nationwide protests and threats of civil war.

So why is this of any concern to me or you?

Venezuela is a beautiful country that has experienced some terrible things. But the stock market isn’t based on emotion, (most of the time) it’s based on numbers. Facts and data.

So when we look at a country like Venezuela, we should see it for what it is: an opportunity. If Venezuela were a company (like Amazon or Google) we wouldn’t want to buy a share in that company. The facts and data all strongly point to SELL. And that’s what we would do- sell the heck out of it.

We have a bearish outlook on the country. The entire region is facing tremendous tragedy, but in every loss lies an opportunity.

So if I had to wager a bet, I would get into to some HYEM, with is a Market Vectors Emerging Markets High Yield Bond. Venezuela is the second-largest country exposure in HYEM. Sell or buy, depending on what YOU expect the Emerging Markets to look like, heavily influenced by Venezuela.

One thing to keep in mind is that what is happening in Venezuela is a TRAGEDY. It is a combination of desperation and confusion, and a society desperate for change. As I researched more about their situation, I saw glimmers of similarities between the USA and Venezuela. Of course, things are radically different in the two countries, but the problem in Venezuela boils down to political incompetence.

The people were desperate for a change when Hugo Chavez came in. So they elected him, because he led the revolution, and he was different. (Sounds akin to what got our current leader into office) Now, almost 20 years later, the country is on the verge of collapse.

They could be the richest country in the world with their oil reserves (but they aren’t). Similar to the blood diamonds of Africa, political fire has kept the country from flourishing.

We have to take a step back sometimes and truly THINK about what ideologies are leading are country. We need to consider if the decisions our leaders make are truly good ones. We need to start paying attention.

It’s time for decisions to be made and things to truly change for the better. Venezuela is a selling opportunity, sure, but it is also an opportunity for America to clean up it’s act. Or else we might follow that same path.