In June, the WSJ published a piece analyzing Amazon’s decision to takeover Whole Foods. When Bezos made his initial announcement, he didn’t give any reason or backing to his decision. He just announced that he was going to do it.

Amazon doesn’t give out any dividends. They are a company completely focused on internal and external growth. They take the money that they earn and shovel it into RD and other ways to grow. That can be seen as selfish to the investors, as the reason we invest is so we can reap monetary gains (and that’s not happening if it’s all going back into research and development)

So is Amazon doing the right thing? Are all the gambles that it is taking going to pay off? 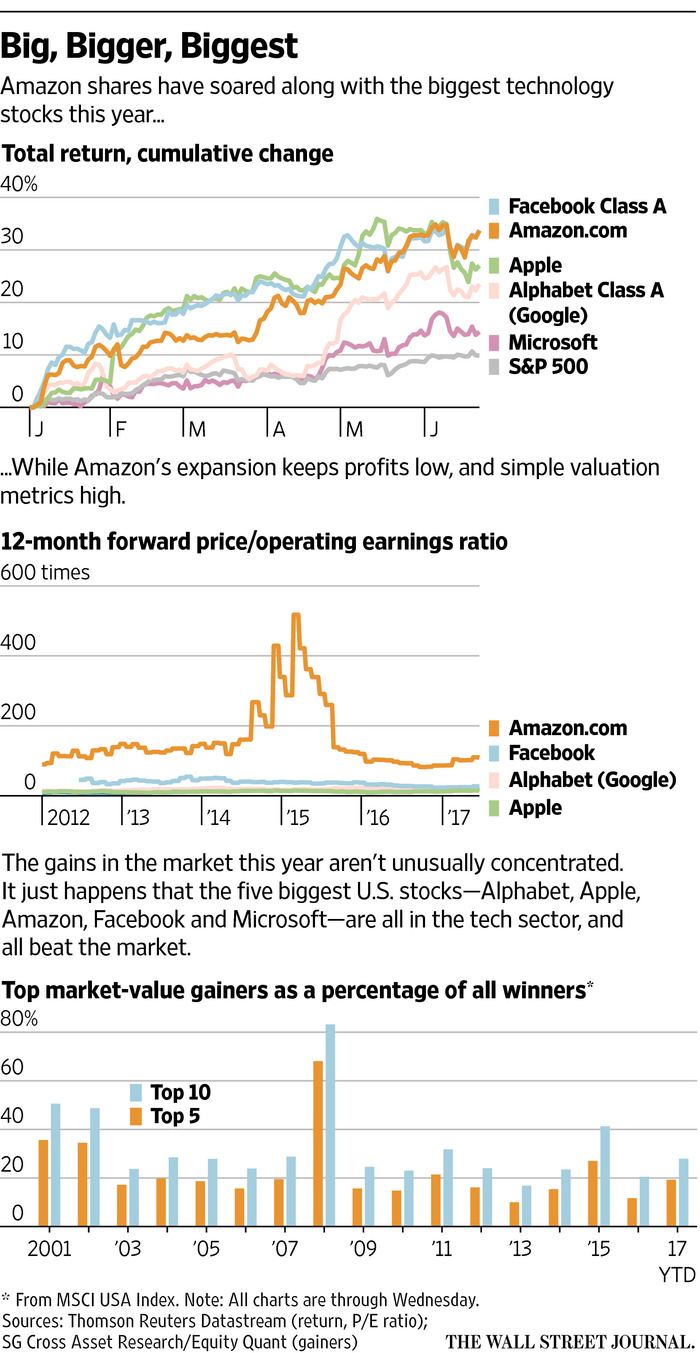 When looking at these graphs, there are a few keys things to notice.

Amazon is a behemoth. It doesn’t have a wildly dedicated fan base like Apple, or 1.32 billion users like Facebook does. But it does have an edge in a lot of sectors, and a big edge at that.

With the acquisition of Whole Foods, Amazon now has a huge foothold in the grocery industry. Upon the announcement of the conglomeration, Smucker and Hormel stock dropped 8 and 6% respectively. Kellogg dropped 5.5% and Heinz 8.6%. Finally, Kroger, Costco, and Dollar General all dropped 6%.

Investors know something is coming. The packaged food and grocery industries are preparing for the onslaught they expect to get from Amazon’s entrance into the market.

No one knows exactly what Amazon plans on doing with the retail location of Whole Foods, but there are a lot of options to take advantage of in the $800b grocery industry.

The online market for groceries is expected to grow 15x faster than that of traditional retail. Amazon is already an online delivery service. Why wouldn’t they expand that into groceries?

We are a consumer convenience society, or as James Mackintosh says, the “human sloth” society. Amazon is getting us one step closer to achieving that. We want convenience, and we want it on our doorstep.

And Amazon can do that.

Then comes the question – what won’t they expand into? What is safe from the Amazon reach?

If the FTC won’t balk at this Whole Foods acquistion, what else will they allow?

Will the entire world be based on deliverable goods?

No one knows for sure, of course. But we can look at this PE ratio bar graph to see speculated growth based on investor perception for Amazon over the next two years.

Of course, reaching far out into 2019 (even 2018) is never completely accurate. But the sentiment is there. Consumers think that Amazon might be slowing down, with a lower PE ratio for each subsequent year. So less growth for the company that never seems to stop growing?

Amazon is a tremendous company with a lot of potential. To say that it will simply stop growing, and stop getting into everything that it can isn’t correct. It’s ready to take over the world, quite honestly.

This is just a 5-year price growth chart. I personally think there is a lot more room for improvement and growth in the stock.

All that being said, nothing lasts forever. Just look at yesterday’s unstoppable winners (General Motors? Time Warner?) to see that. But Amazon has been able to reach into industries and connect them in a way that no other company has been able to. And that warrants some thought.