EVHC and the Economic Effects of Financialization

EVHC is a stock that has experienced a lot of movement recently, with a lot of different events effecting its valuation and stock price intensely.

The stock trades in the Healthcare Services industry, and has a relatively small market capitalization of $5.8 billion. They don’t give out dividends. As of recently, they don’t deliver POSITIVE earnings per share – their EPS for June 2017 was negative 42 cents. (Information Courtesy of SP Capital IQ)

The stock has a 52 week high of $74.74 and a 52 week low of $43.85. The share price has dipped 3% in the last day to reach that $43 mark. 5 days ago, we were hovering right around $48. With the announcement of the proposed Graham-Cassidy bill, the entire healthcare market was sent into a bit of a tailspin, and EVHC felt that in the share price decline. (Information Courtesy of SP Capital IQ)

So the company operates in 2 key business segments – physician services and ambulatory services, and previously medical transportation which they sold to KKR, a private equity firm on August 8th of 2017. (Information Courtesy of SP Capital IQ)

The company has been making some interesting decisions.

You can read about the overall healthcare industry here or here.

EVHC is a representation of that sector of course, but this post is more focused on what this company is doing, and if it can even continue on the path it is taking.

This is a chart of EVHC’s revenue over the past 5 years. Of course, they merged with AMSG in late 2016, so that is a variable to be considered. 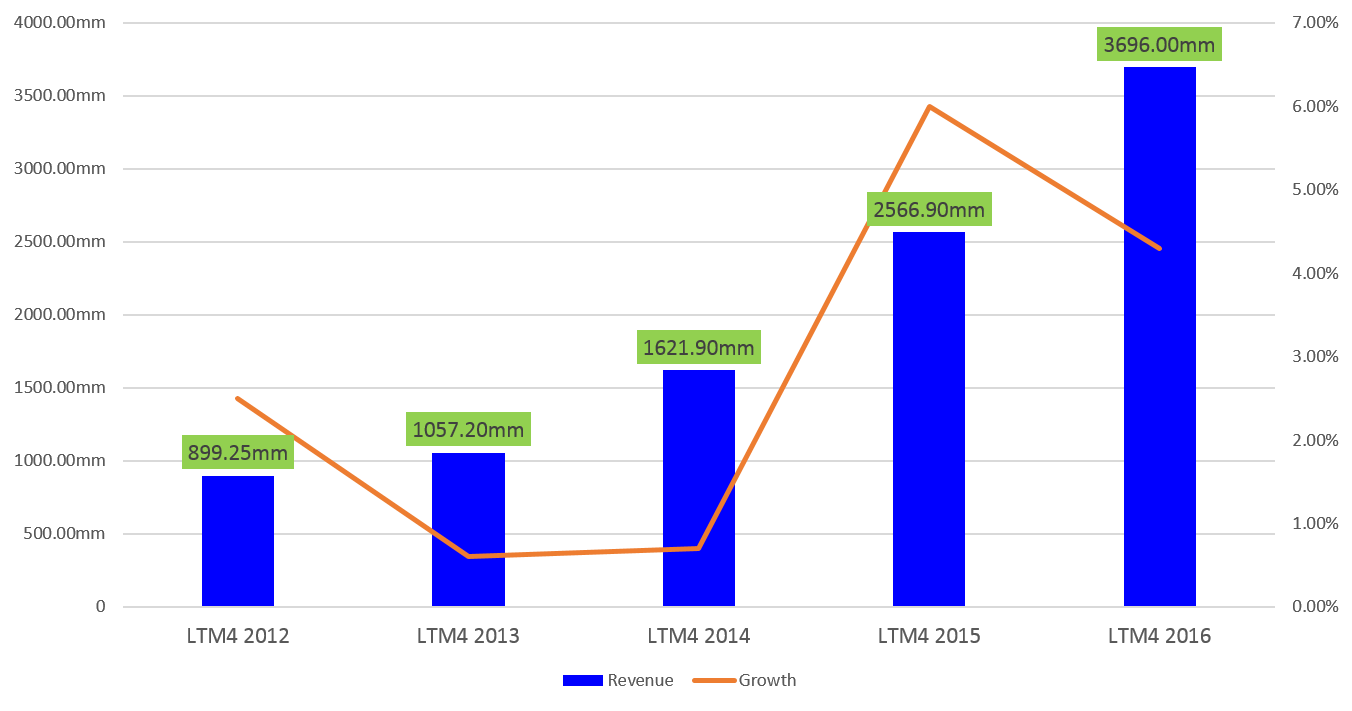 So the revenue of the company looks relatively healthy, right? Nothing to be overly concerned about. 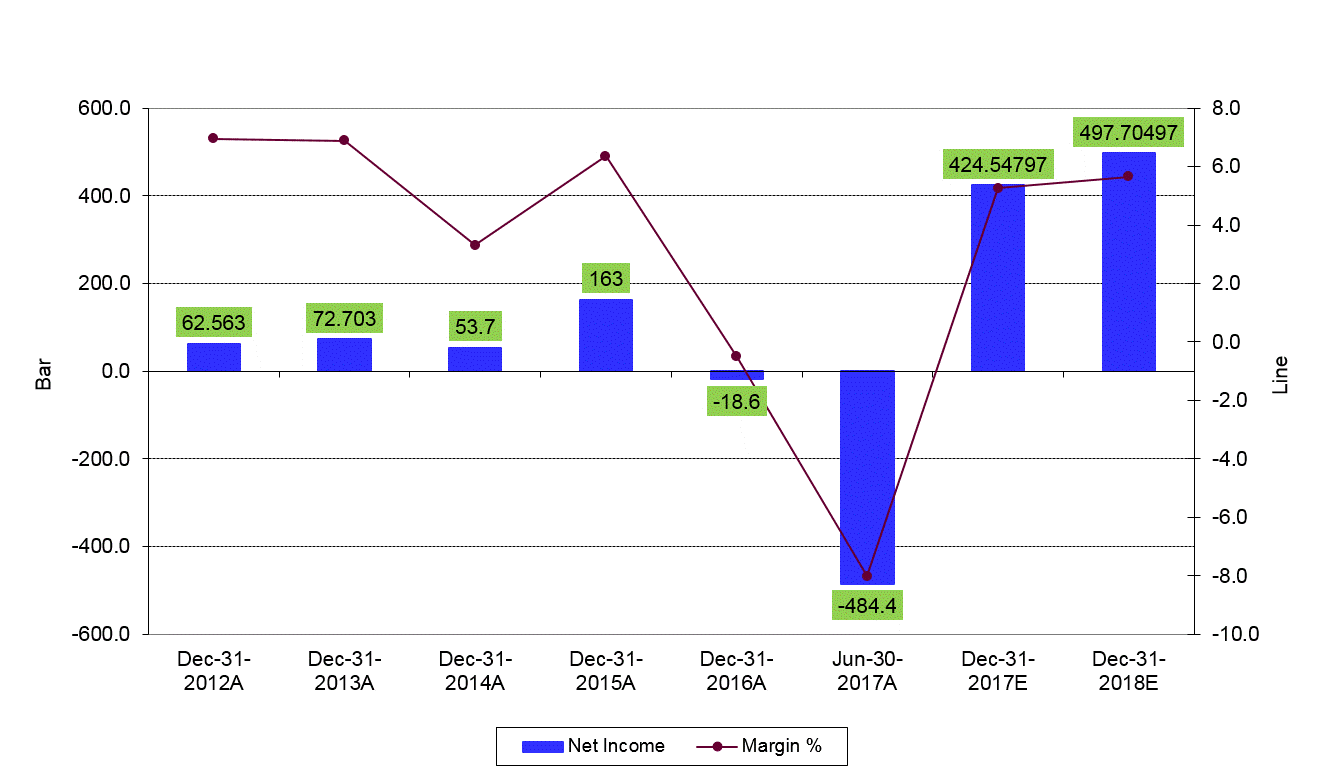 Those are some nice graphs.

Debt increased to $5.9 billion as of August 2017 (it’s rapidly increasing at a sweet rate of 145.6% per year). Interest expense represents 38% of operating income.

When we look at companies, negatives tend to be red flags.

WHAT IS GOING ON WITH THIS COMPANY?

How could something in such a promising and undervalued sector have such a complete meltdown? They are part of a $98 BILLION industry, that has access to the millions of sick Americans.

Of course, the Graham-Cassidy bill would hurt things. That would essentially put healthcare in the hands of the states, and honestly change the way the entire system is run. It would be more impactful for insurance stocks, but EVHC and the industry would feel that punch.

But EVHC has made a mess of things for themselves.

First of all, this lawsuit is the reason that people hate hospitals. It has been charging 28% of the patients that go through their network with the highest billing code, versus the industry average of 6%. That means that if you go to a center run by EVHC, you are more than likely going to be slapped with a huge bill, without your knowledge.

EVHC does something called “surprise billing“. So they have out-of-network physicians at these centers that patients visit for treatment. And insurance companies won’t cover someone that is out of network. So it’s KEY to go to an in-network physician if you want your visit to be covered.

But EVHC would have people visit with out-of-network physicians, but the patients had no clue. They thought that these physicians were in-network, because no one told them anything any different. So all of the sudden, a bill for $1,649 would show up on your doorstep for out-of-network treatment, and you would have no idea how or why this happened.

But you have to pay it anyway.

So EVHC increased their revenue in this way, making sure that they charged the highest price they could for every service they offered, running additional tests and admissions that were frivolous and unnecessary.

That means the current revenue is unsustainable.

So not only is the company drowning in debt from acquiring so many different centers, they are also going to lose a significant portion of revenue, both from the loss of their medical transportation unit, the lawsuit, and the aftereffects of the lawsuit on how they do business.

EVHC engages heavily in something called financialization. This is basically “phantom wealth“. Using debt to buy assets. Using debt to produce more goods and services without any collateral backing the purchase. 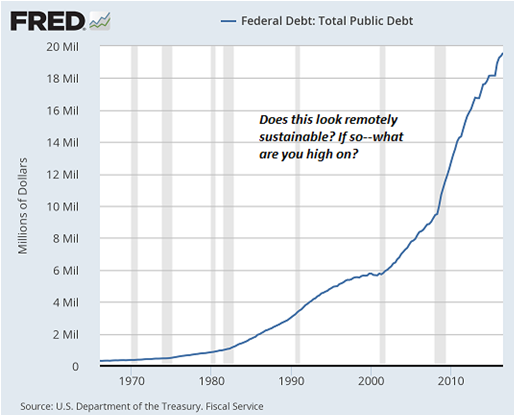 The discipline in the market is gone. Sound money, limited leverage, prudent lending, separating investment and commercial banking, and so on and so forth, as Charles Hugh Smith lists, have disappeared.

And EVHC is the perfect example of that.

The entire economy has surpassed level of “sustainable debt”. 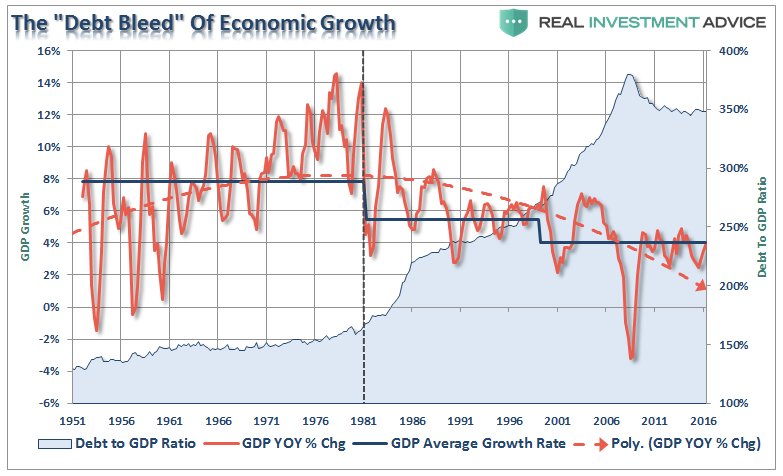 The World Bank found that if the Debt-GDP ratio was greater than 77% for an extended period of time, that slows economic growth. (thebalance.com)

Basically, it takes more debt to fuel one dollar of economic growth once you hit the “tipping point” of debt. It’s the law of diminishing returns. Too much of something is never a good thing.

I will write a post about the Debt Super Cycle that America is in right now, but I just wanted to expand upon the idea that debt is not a vessel for growth.

It has a time and place, sure. But financialization leads to low growth and low profitability. And EVHC is experiencing that.

They have lied to gain an upper hand and borrowed more than their company is worth.

If EVHC is using these methods, and if the Federal Goverment itself is as well, is the entire economy hollowed out by financialization and false information? If it is, what will happen to consumers when it all bubbles to the surface?

“Financialization has consumed the nation’s seed corn, and the harvest of instability is ripening in the fields of finance and the real economy alike.” – Charles Hugh Smith (who was also the inspiration behind this piece)