The Bipartisanship Crisis: What the Irreconcilability Means for the Future

“We need some government to do some things — keep the peace, for example — but otherwise, government should mostly leave us alone.” – Tyler Durden

Right now, our country seems to be suffering from the malady of the supposed necessity of bipartisanship. Everything is yes or no, right or wrong, here or there. There is no gray area.

But the issue is that the world is gray – we are not able to completely divide ourselves down the middle, or else we become stuck. If we don’t allow some gray, we don’t get things done that need to be done. The epitome of inefficiency.

This isn’t pointing fingers at either side. It’s just the idea that we are entering a political arena so saturated with pride that both sides are blind to who they are there to represent – the people.

One of the most recent examples of this is the decision to repeal net neutrality, despite 80% of Americans opposing it, according to CommonDreams.org. Net neutrality is essentially the idea that Internet Service Providers can’t control the speed of content, or prevent you from viewing any content: an open network.

There are a lot of different views on why Net Neutrality is good, why it is bad, and why it doesn’t matter.

The point I am most concerned with is that 80% of Americans opposed the repeal of it.

How is the government going to claim that they represent the people when they don’t listen to the wishes of 80% of them?

Most people think it’s another win for big corporations and a loss for small business owners, according to the NY Times. But that’s semantics. I’m analyzing this from a bigger picture, from the point of crony capitalism.

The repeal of net neutrality the government interference in interfering with something that they already interfered with.

Then there’s the Tax Cuts and Jobs Act.

The whole significance behind it, how it once again evolved into the Republican vs. Democratic; winner vs. loser – seeing sides without seeing purpose. We definitely needed tax reform. And some parts are good. (Here’s all 429 pages and a calculator to determine its impact on your personal statement)

The semantics of the bill are beyond the scope of this post, but there’s a couple of important point is this: the cost will be $1.49 trillion over 10 years which makes it the 8th biggest tax cut in history in terms of % of GDP and it’s more complicated than ever, according to factcheck.org

I think the issue at hand with both net neutrality and the tax reform act is the priorities of the government (not saying that we didn’t need tax reform, we most definitely do). 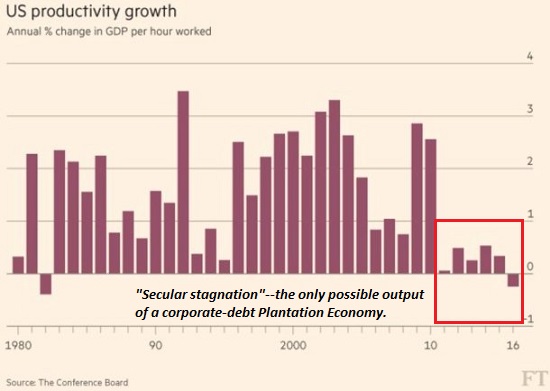 Image via Of Two Minds

They are avoiding recognizing the problem that their deficit spending has created (which will only worsen with the tax plan).

The current US deficit is at $20T, according to the US National Debt Clock.

According to Peak Prosperity, there is essentially a domino effect with the lack of savings and the excess of spending represented in the deficit. There is a failure to properly manage money on all levels: federal, corporate, state & local, and individual, and a “widespread failure to invest“.

David Walker, former comptroller of the US, talked about the deficits that the US faces in a speech to the US Naval Academy in 2007 (that still ring true 10 years later)

That deficit spending and lack of adequate savings mentality leaks into the American public.

We are a culture of debt, and our government is doing nothing to focus on ending that stigma. “All efforts are centered on boosting current consumption while ignoring savings and investment” What good is that going to do 10, 15 years down the road when the next generation takes the wheel?

Here’s a quick example of the revision from Q1 to Q3 measures of spending, showcasing the (excessive and concerning) spending habits of Americans. But the most important thing to note is the massive revision in the healthcare number. 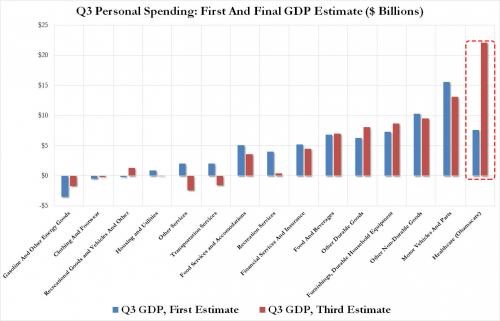 To quote Tyler Durden of ZeroHedge.com, “The contribution of Healthcare was (dramatically) revised higher… one can almost hear the orders “from above” to make GDP 3% or higher at any cost when looking at this chart.”

The government has stuck its nose in a lot of different places, and has caused some serious issues (healthcare, higher education, internet). Their focus on bipartisanship, rather than the good of the American people, has caused a couple of different problems.

Not all spending is good spending. Not all fights are good fights. Not all decisions are good decisions. These things matter because the impact that they have on the future of the US economy and the future generations standard of living is too big to measure.

But the current power trip between the political parties has entirely forgotten this. They don’t listen to the citizens. It has become who can spend the most money for the silliest of reasons, or who can pass the most legislation that completely defeats the purpose of a democracy.

What’s the point of bipartisanship if it isn’t fiscally responsible, isn’t moving us together as a nation, isn’t honoring to the will of the people, and is negatively impacting the future of its citizens?

There isn’t a point. Seeing sides without seeing purpose is a rat race in which no one, the government or the people, will win.