Governance through Decentralization on the Blockchain

Decentralization is an important part of the blockchain, and one of the reasons that a lot of investors are curious in the product. The way that the blockchain operates is on a peer to peer network, utilizing consensus mechanisms. There is no over-arching “person-in-charge” (on Bitcoin). On some of the other coins, such as Ethereum and Vitalik Buterin, there is direction and input from the creator of the coin, but they don’t control the entire exchange process.

Centralization is what we currently have across our platforms. For example, Mircosoft, Apple, and basically all companies have a C-Suite and a Board of Directors that determine the direction the company is going. Decentralization, on the other hand, is uncommon. It is the idea that there is no central leader – rather, it’s peer to peer. Technically, everyone is the CEO.

There are many positive aspects to decentralization on the blockchain. One, is that no one can flood the market with coins, as all transactions are logged and public on the ledger to prevent such devaluation. Fiat currency is nothing but a continuous cycle of printing money to flood the market to control the value.

Fiat currency also fluctuates in value across international borders. So international trade can be tricky, as the peso might move astronomically against the dollar, which impacts the balance of trade for both the USA and Mexico. Cryptocurrency doesn’t do have that component of currency risk, due to something called atomic swaps, which will be discussed later. There is essentially no exchange rate risk, because cryptocurrency is universal. There is no need to exchange it for another currency to engage in trade. (Gestalz, 2017).

Another great thing about cryptocurrency, is that it can become a bank for the impoverished, as discussed by Jaime Cobham in the Harvard Political Review. Almost 75% of the world’s poor are unbanked (World Bank, 2012). A bank denominated in Bitcoin or another cryptocurrency would allow for more capital flow in those areas, as the transaction costs are lower in the peer to peer networking system, as compared to the centralized system of banking. It would be cheaper for the impoverished to bank with Bitcoin, rather than the dollar.

However, centralized systems aren’t always a terrible thing. Because of centralization, the Digital Age exists. There was access to world-changing technology. But over time, the centralization wears down on creators, as the rules to the system change, and that changes the income stream for the platforms (Net Neutrality is one recent example that could have a detrimental effect).

Chris Dixon explains the relationship between end-users and the platforms in a centralized network system as an S-Curve.

At the beginning of the centralized platform’s history, the growth is almost exponential. However, the effect begins to fade, and the relationship turns into a zero-sum game for the end-user, as the platform scrambles to get resources to continue growing.

Cryptoeconomic networks incentive users through “tokens” and uses consensus mechanisms to keep users involved in the process, and thus don’t have to scramble to grow. As explained by Dixon, “In short, cryptonetworks align network participants to work together toward a common goal — the growth of the network and the appreciation of the token. This alignment is one of the main reasons Bitcoin continues to defy skeptics and flourish.”

Users have to give up data to allow the centralized platforms to profit, which is where the S-Curve flattens out. The platforms sell the data to various companies to continue making money. The availability of personal data is an issue because this increases the vulnerability of the users to breaches of security. These breaches have been consistently increasing, with a growth rate of 40% in 2016, according to Heidi Datch of identityforce.com.

It’s not just small companies that are getting burned – over the course of 2017, Arby’s, Verifone, Saks Fifth Avenue, Chipotle, Gmail, Washington State University, Equifax, and the SEC were all affected. This threat is universal across centralized platforms.

In a decentralized cryptoeconomic network, the end-users are essentially “anonymous”. The only thing that can identify a user is the key that they use to engage in transactions. There is no real world identity attached to the address, theoretically (Kasireddy, 2017). But there are issues with this concept (hence, theoretically), especially when numbers are connected to individuals as the FBI demonstrated back in 2014. (Greenberg, 2014)

However, as Preethi Kasireddy, a blockchain engineer, discusses on Medium, there are several different solutions that can be implemented:

There are Elliptic Curve Diffie-Hellman-Merkle (ECDHM) addresses that keeps the address a secret. The ECDHM basically acts as a wallet for the Bitcoin address, and only the receiver of the transaction can unzip the wallet. The only thing public is the ECDHM address, which is reusable, and used by many different users.

There are also actual coins that are private, like Monero, which utilizes a ring signature. When a transaction is approved, one person from an anonymous and mixed group of people sign it. That way, it is hard to distinguish the signer from the rest of the group.

Zero Knowledge proofs are also another option, which are becoming increasingly popular. Game theory can be utilized, where the end user has to solve a challenge to receive the resources. zkSNARKs, and their modifications are also options. These are zero-knowledge Succinct Non-interactive Adaptive Argument of Knowledge. This basically means that they can be quickly verified (succinct), the receiver and verifier do not have interact at all (non-interactive), and that there is a proof of knowledge involved (AAK).

ZkSNARKS can be combined with different coins, such as zCash and Ethereum (Kasireddy, 2017). This means that instead of storing things on the blockchain, it can stay with the user, enhancing privacy. Then, there are zkSTARKs, with the T standing for transparent, rather than non-interactive. This means that they rely on hash functions rather than complex problems to work, so they are more user-friendly.

Code Obfuscation is another process that can be implemented to increase the privacy standard on the blockchain. This basically works in the process of taking A and B, and creating two different functions, and obfuscating it. That way no one knows where the output came from.

There are also oracles, which get the data from an external source, rather than on the blockchain. Trusted Execution Environments are also an option, that enclaves the data, running side by side with the current operating system. All of these systems are in their beginning stages.

Despite the decentralization (or because of it), there is a united community behind the blockchain. It poses the opportunity to rewrite the current networks, and align them more to what the people want.

What is appealing about the blockchain is that the trial and error with governance (decentralization vs centralization) is already happening. There are over 1,500 different altcoins according to Coin Marketcap, running their own systems and failing.

But failure is the best teacher in a case like this.

As Fred Ehrsam writes, there are two “critical components to governance”. The first is that it has to be composed of incentives. People want a strong reward structure, and those with power will change things so it matches what they want. There also has to be coordination between the groups to create a common incentive. 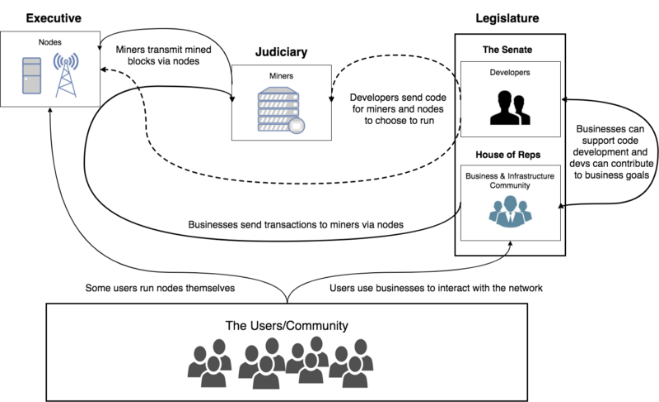 For example, Bitcoin incentives developers, miners, and users through increasing value of existing tokens. Developers are further incentivized through increasing social status by affiliation, as well as power over the coin. Miners look forward to future block rewards, and users can look forward to an increase in functional utility for the coin. Coordination is mostly done off the chain. (Ehrsam, 2017)

This system isn’t perfect. Developers don’t have a lot of incentive to stay with Bitcoin, and miners can gain disproportionate mining power, which can skew the system. What is appealing about Ethereum is that it utilizes proof of stake rather than proof of work – this allows for miners and users to become essentially one in the same. However, they still struggle with incentivizing the developers to stay and improve the platform.

The future of the maintenance of the blockchain is a key issue that must be considered. In reality, the technology can be usable and valuable, but if there isn’t a way to sustain the system, that doesn’t matter. Decentralization is still an important component to the cryptoeconomic system but there needs to be a permanent “community and social consensus around a chain.” There is one right now, but the continued existence requires some modifications (Ehrsam, 2017).

The governance solutions to keep the decentralized system alive can be as simple as forks, which is breaking off into a new version of the same coin or usage of the futures market to determine consensus in the market place based on the value of the futures contract.

Or it can be as complex as quadratic voting, which is the process of buying votes, but each vote gets more expensive after the first, and isn’t as powerful, as discussed by Vitalk Buterin in his reddit post.

A futarchy is also possible, which involves “aligning market incentives with societal values” (Ehrsam, 2017) through a satisfaction vote at the end of each year. This is an interesting proposal because it eradicates the needs for political parties, because all you do is vote 0, not satisfied to 1, very satisfied. Liquid democracy, another option, gets rid of representatives entirely, as everyone votes on every single thing.

The blockchain is an incredibly powerful tool. What it boils down to is that the idea of decentralization is important, especially in today’s atmosphere. However, proper preservation of the metaprogramming behind the blockchain is key to its continued success.