“What goes up, must come down” – Sir Isaac Newton.

Newton created his theory of gravity by observing apples fall from trees (amongst other things).

As his friend William Stuckley wrote – “we went into the garden… under the shade of some appletrees… the notion of gravitation came into his mind. “Why should that apple always descend perpendicularly to the ground, why should it not go sideways, or upwards… assuredly, the reason is, that the earth draws it. there must be a drawing power in matter… therefore dos this apple fall perpendicularly, or toward the center. if matter thus draws matter; it must be in proportion of its quantity. therefore the apple draws the earth, as well as the earth draws the apple.” – excerpt from Memoirs of Sir Isaac Newton’s Life, William Stuckley

Everyone has questions about apples  (or AAPLs)falling. About the stock market. About companies. About government.

About how far AMZN can reach. About how TSLA can completely miss earnings and still go up. About how FB can miss earnings (and what exactly do those FB earnings compose?). About how big AAPL’s $1 trillion dollar market cap is, in the grand scheme of things.

And what the strength and power of these companies means for everyone.

There’s a new term that funnels all those companies into one – Big Tech.

I think they’ve replaced the big banks in terms of power and influence. Here’s a breakdown of AAPL, America’s Golden Child, king leader of Big Tech, and the reason Sir Isaac Newton developed his theory of gravitation.

The one trillion dollar baby.

After their earnings beat, the stock bounced. People were excited. People love AAPL, and they love their AAPL products.

And the market loves AAPL too.

And on August 2nd, 2018 the company officially became the first US company in history to hit a one trillion dollar market cap.

This one trillion dollar company now composes approximately 4.24% of the SP 500, and coupled with their FAANGM cohorts, it controls 17.9% of the SP 500.

That’s the power that these companies have. The Big Tech companies MATTER to the success of SP 500, the key metric that people use to determine the performance of America’s stock market. They are a “small group of huge companies” as James Mackintosh of the Wall Street Journal writes, and “a lot of money is riding on the idea that the big five’s fat profit margins or rapid growth are impervious to competition, even from each other.”

Remember, that there are 500 companies in the SP 500. Because it is market cap-weighted, the companies with the most market cap are going to have the highest weight on the performance of the index (Big Tech).

The above chart is titled as the “chart that broke the internet” since it compares the top 5 SP 500 companies versus the bottom 282 (so 213 companies are not represented). It’s misleading (which is what makes it so brilliant) – a lot of people thought it was all 500 companies – and that the top 5 represented 50% of the market cap of the SP 500.

So when people base their performance of that of the SP 500, maybe they should consider that 17.9% of that performance stems from Big Tech industry. And that maybe, the SP 500 isn’t really a reflection of the entire large cap universe.

And with regards to that $1T market cap that AAPL has that gave a boost to the SP 500 – take a look at what happened to PetroChina after they hit that milestone.

PetroChina is a bit of a different story than AAPL. They hit one trillion on their very first day of being public on the Shanghai stock exchange, which is absolutely insane. Their PE ratio was three times that of similar companies. They deal in oil and gas, which is historically a pretty volatile industry.

And that led to their eventual demise. An oil bubble in China – speculative investors siphoning money into PetroChina when oil was $100 a barrel, and hyping it all the way up to one trillion dollars in a single day. Two years later, oil dropped to $34 a barrel, and those 500% gains during that time period were wiped out.

And it’s happened before.

Check out the Dutch East India Company, a company worth more than the modern day GDPs of Japan and Germany combined.

They were the first company to go public in 1602. They had a monopoly on trade, and did things that no one else was doing with regards to voyaging and conquering. And they had tulip demand on their side.

Europe had a futures market in the early 17th century, that allowed participants to speculate on many things, most notably the tulip market. The price of tulips were bid to incredible levels, as a “status symbol” that could result in profits of over 400% for voyagers.

But someone defaulted on their tulip bulb payment in Haarlem one day. It spiraled from there. Then the Tulip Mania bubble burst.

History doesn’t repeat itself, but it does rhyme.

However, all that takes time.

Right now, AAPL is in some sort of tulip mania. It’s hyped up. And yes, they do have strong fundamentals, and have grown metrically since 2017 and even since Q2 2018. Revenue is up 20% year over year, and EPS is up 40% (a crack in the foundation, which I will discuss in detail later). They are growing overseas. Customers are loyal. Revenue from other services, like Apple Music, has surged into 2018.

AAPL expects revenue to increase another $10b into Q4 2018, with gross margins hovering around 38%.

There are two things that are helping them:

Those two things might go hand and hand – AAPL is using the flows from the tax-cut to buy back shares. They bought back $100b of their own stock. That’s why EPS increased 40% – when you decrease the denominator of something (in this case, the number of shares) the whole number is going to increase.

Those stock buybacks of $100b represent 2x the $50b market capitalization of TSLA, to give you an idea of how substantial that number is. AAPL is essentially buying two Tesla companies, and funneling that back into their company.

It makes sense to buy back your own shares, especially when you think they are undervalued. If AAPL thought that their stock was really worth $230, they should buy back shares at $190 – that equates to essentially a $40 discount.

So maybe all this buyback stuff really isn’t a bad thing.

Maybe it really isn’t a bubble within itself, where companies are speculating on their own success stories, inflating their EPS to 40% what it was a year ago – maybe it really is creating value in the stock market.

Maybe it doesn’t compare at all to Petrochina or the Dutch East India Company.

After all, everyone is doing share buybacks. Most of the tax cut is going towards that, despite the fact that it probably (hopefully) wasn’t the goal of the act.

JP Morgan has a Long Buyback basket that contain AAPL, MSFT, GS, and 50 other companies that met five criteria: “cash held overseas; net income growth over the next two years; last 12-month buyback announcments as a percentage of market cap; last 12-month net buyback yield, and market cap greater than $20b” – basically the big guys that buy back a lot of stock.

JP Morgan reports that those stocks have outperformed others by 175 basis points on average.

That outperformance is most likely due to artificially inflated stock prices.

It would be interesting to see the long term value created when the money from tax cuts is used for substantial growth investment, like reducing the cost of product so it’s accessible to more consumers (widening the target base), creating meaningful jobs (actually improving unemployment), and MAYBE boosting wages, which have been stagnant for years (increasing consumer spending = real increase in GDP).

That means that their stock price should be 10.3% lower than it should be.

But call a spade a spade – share buybacks are creating some sort of value (artificial or otherwise) that are boosting key metrics that investors look at.

And AAPL is doing a really good job at being a company that people want to buy.

AAPL is a strong brand. They have a lot of cash. They are a core component of many people’s portfolios, and they are riding on cloud nine.

If you think that AAPL still has room to run for the next few months, the 30 delta short 200 strike put in the Sep 21 expiration with 46 DTE is a bullish strategy has a 75% probability of profit with a max profit of $257 and generates $5.04 of positive theta. 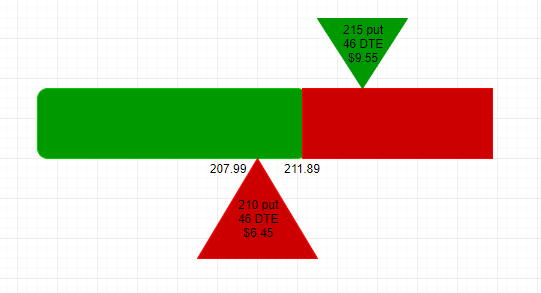