The Value of Currency

Currency is only effective if it does three of the following things:

Emerging market currencies are notorious for their volatility and their periods of hyperinflation. Venezuela, Zimbabwe, and Argentina are all well-known instances of extreme increases in inflation rates, with Zimbabwe posting an inflation rate of 79,600,000,000% for the month of November in 2008. This scenario resulted in poverty billionaires – “people had a salary of one billion, but a loaf of bread costed 2 billion”. 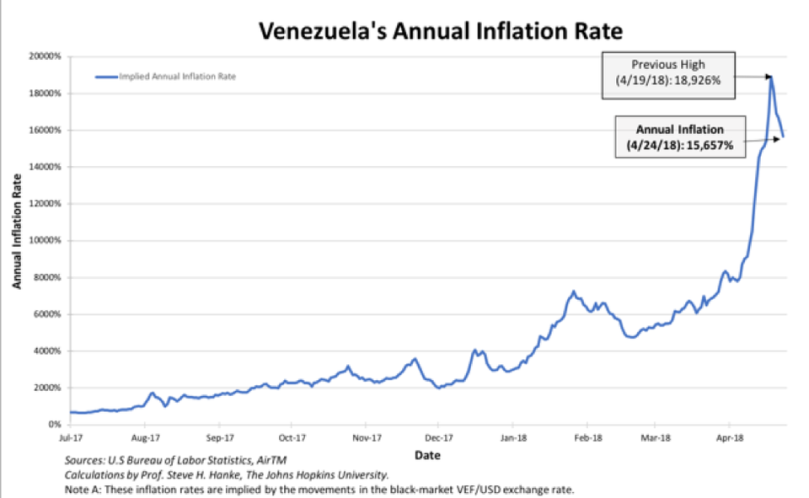 Emerging market currency is historically much more volatile than developed market currency. That’s why the US Dollar is the world’s reserve currency – it holds its value, it’s worth is well known, and it’s very widely accepted. Imagine if you tried to hold onto the Venezuelan bolivar as a store of value – it would all be wiped out immediately. People in the US know (and expect) that they are able to buy a sandwich for ~$5-$10, and we expect our money to be relatively liquid in trading. Some emerging market currencies don’t have that luxury. 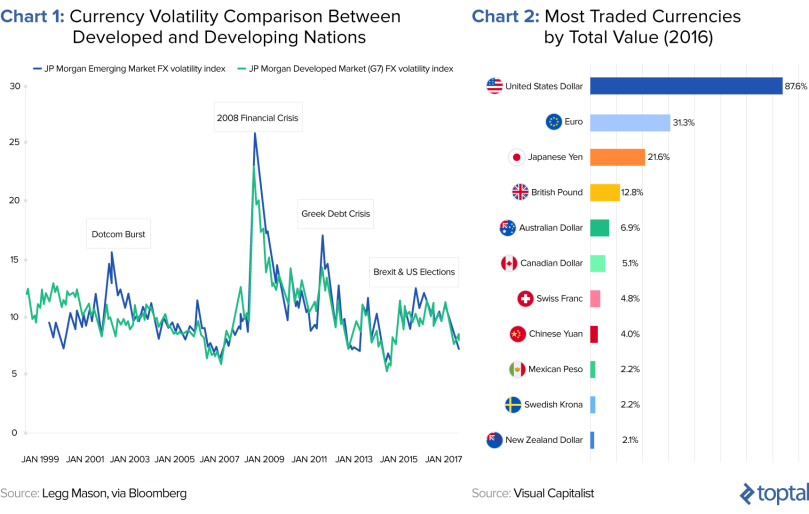 Capital Outflows: Where is the Money Going?

Emerging debt markets had $4.8b of outflows for August 2018, according to the Institute of International Finance. Interestingly enough, more money flowed into China this summer, making up 82% of all equity inflows into Emerging Markets. People seem to be channeling their money into the well-known Chinese markets, and avoiding the more volatile, uncertain markets. 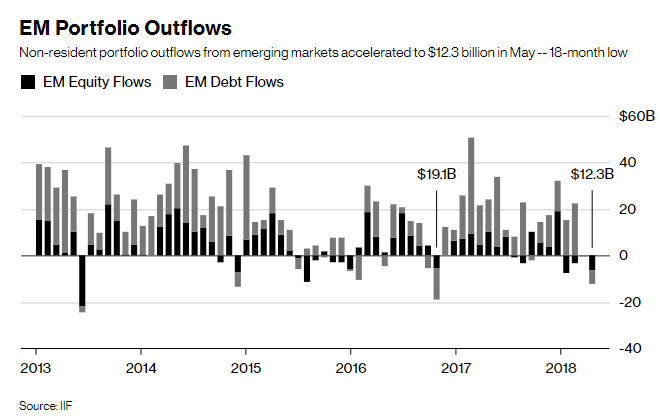 However, China can’t support the whole EM market (the SSE Composite can barely support itself & FXI is down 33.6% from 52-week highs). This past week, the iShares MSCI Emerging Markets Index (EEM) officially fell into bear market territory, which could spell more trouble ahead, for both emerging and developed markets (the contagion effect is real). EMs have had a particularly tough summer, with Turkey turmoil, trouble in Argentina, a South African Recession, and currency losses across the board. 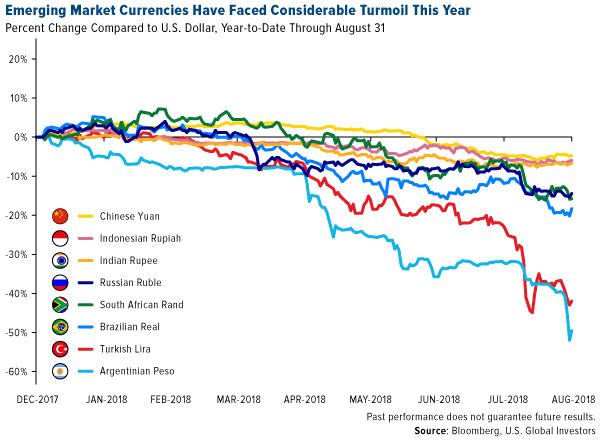 US Debt is something to be reckoned with. Our annual budget deficit is expected to consistently surpass $1T for the next 10 years, with our debt-GDP ratio shooting up to 117%, according to the IMF. EM’s have their own share of debt, and it’s approaching the $60 trillion dollar point (with a large portion of that contributed to China). With approaching debt maturities and solvency issues, emerging markets could really be in for some trouble. 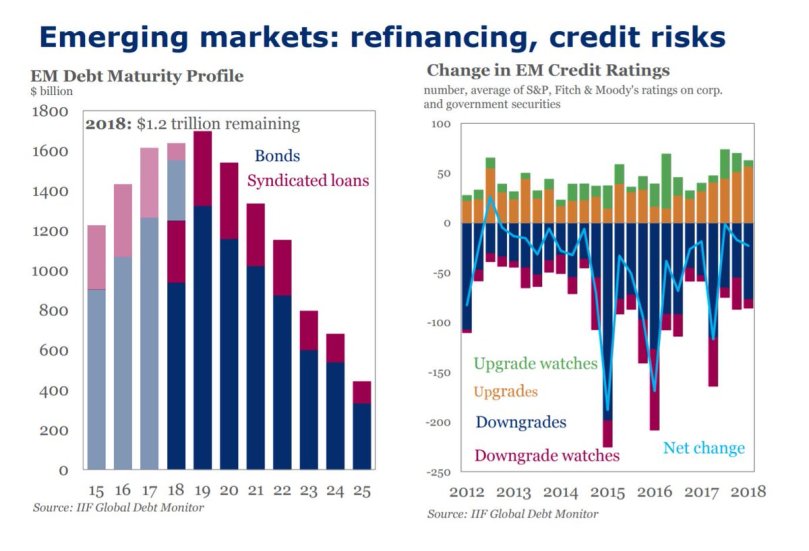 It seems as though everything is moving against emerging markets right now. So what can be done to spur growth in the right direction?

Cryptocurrency: The Shift from Fiat Currency

Bitcoin has experienced quite the downturn this year, falling 65% from it’s December highs. The huge sell-off was a wake-up call for a lot of investors, especially the ones that were betting it all on the continued growth of the coin. The whole cryptomarket has been bearish since its December crash. A lot of people have turned a blind eye to any sort of movement, and for a good reason. But what if cryptocurrency can be utilized within emerging markets? 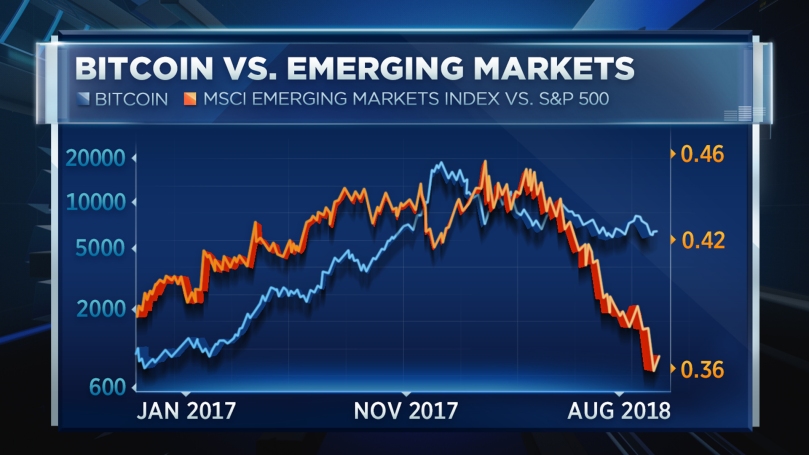 For an Emerging Market currency to be considered stable, it is important that they maintain large reserves (most often of USD) and rely less on commodities and maintain a diverse portfolios of exports, ideally focusing on manufacturing.

For a cryptocurrency to be considered stable, it must have a steady inflow of capital. A lot of cryptos (like Tether, Basecoin) are pegged to the value of the USD. However, flexible rates are often times more conducive to long-term growth, and can encourage capital inflows down the road (just look at the 75% loss of value consequence of Argentina’s currency peg to the USD).

Flexibility, even in the face of potential devaluation, can often be a big determinant of value. Think of it as trying to build a fire – if you throw down all your kindling at once, you’re going to get an explosion. If you can steadily add kindling and tame the flame, the fire will end up much stronger, and much more stable. Currencies are the same way – if a country empties their foreign reserves all at once to try and stabilize their currency, the eventual downfall will be that much more painful. However, if they can steadily use foreign reserves, and buy and sell in a mechanical fashion, that will help them to propel out of periods of pain.

Emerging markets are slowly but surely learning that process. However, the banks in those countries still charge exorbitant fees, and there are problems with financial inclusion (even in developed markets, people still remain unbanked). There is an across the board need for transparency, empowerment, and access to an affordable transaction system in emerging markets.

Cryptocurrency has the potential to provide that. Cryptocurrency is in a world of hurt right now, hitting a 10-month low today on news that “adoption will take time” and significant cash outflows. Bitcoin has lost $640B in market cap from January, and Ethereum took a nasty 11% dive this week alone. The hype is gone from the crypto market, and most of the coins will face the same downfall that the tech companies had back in 2000.

But when we examine the economies of Argentina, Turkey, and South Africa (the homes of the worst performing currencies year-to-date), there is “some kind of external or fiscal imbalance, FX reserves are typically in short supply, and many are on shaky political footing”and they are heavily indebted in the ever increasing US dollar. 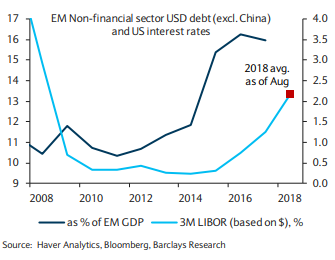 As global liquidity dries up, as US interest rates rise, and as the USD continues its upward trajectory, Emerging Markets have to find another outlet for financial stability. Cryptos are a long call (only 10 cryptocurrencies have 1000+ active addresses) but effective utilization of cryptos could contribute to the long term growth story in emerging markets. In fact, Bitcoin has a larger market value than the coins and banknotes of the United Kingdom, South Korea, and Canada.

Many people, including Steve Hanke of the Cato Institute, advocate for gold as a control against government manipulation of currency, as hard assets tend to retain their value over time. However, the actual process of tying currency to gold has been abandoned by almost every single country due to the accountability it requires – you can’t manipulate currency if it is tied to a physical  asset, and that prevents governments from adjusting the money supply, interest rates, etc.

As we enter in a new era of debt, with monetary tightening across developed economies, cryptocurrency promises transactional power to the citizens. We all have to live with the decisions that our governments make – there is no avoiding the pervasiveness of policies. There is also people who experience cryptos through charts and headlines, and those who experience it in reality, as pointed out by Arbedout on Twitter.

Just look at the difference between these four tweets: the first are from Venezuela and Iran, both countries that have less than stable currencies. Venezuela is on track to hit a one million percentage inflation this year, according to CNN, and just replaced their currency with a new currency minus five zeros. The Iran rial fell to a record low on 9/5/2018, losing a quarter of its value over three days.

The two tweets above are from Upper West and Upper East Side Manhattan, respectively. A much different environment. We see the different outlooks highlighted above, cross comparing EMs to developed markets. Emerging Markets, like Venezuela and Iran, have a need for the relative “stability” that cryptocurrency can offer (I realize how insane that sounds), in the face of their own fiat fluctuations, excessive debt, government manipulation and massive inflation. In developed markets (particularly the USA), we know that the USD will remain relatively stable and will more than likely inflate 2-3% a year – not 1,000,000%.

The stability of some of the emerging market economies rely on the unknown of cryptocurrency. It can be implemented to provide financial inclusion to the 2 billion that are unbanked, reduce transaction costs for international transfers, and support economic growth. One of biggest issues we face? Getting tech to the people that need it most.

I still think that cryptos are a shaky investment market, and there is a definite risk-reward trade-off there. If you can stomach the volatility, I think that BTC and ETH should be strong for the long-haul. For now, I still think that EEM and other emerging market investment tools provide exposure to a market that has the opportunity to grow. The extremely beat-up iShares MSCI South Africa Index Fund EZA is trading at $50.55, and the short 50 ATM put is currently trading for $235 max profit, with a 62% probability of profit and a daily theta of 2.35. 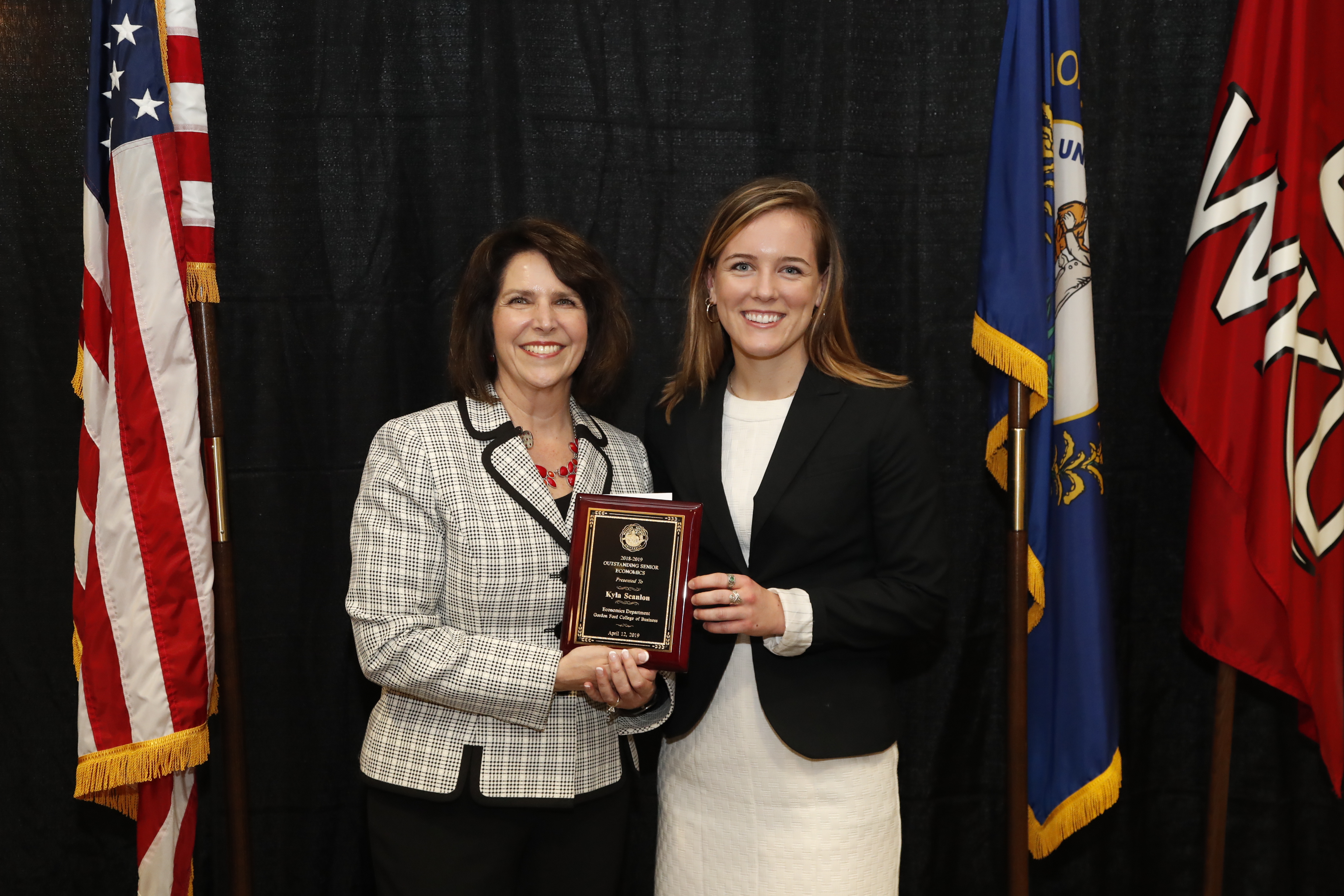