Afraid Of The Dark? Why The S&P 500 Is Not A True Measure Of Stock Market Strength

But are all stocks benefiting from this Bull Run? Does a rising tide really lift all waves? And has that 300% wealth increase come to fruition?

Those Who Aren’t Invested At All: The 46% and Growing

46% of Americans are not invested in the stock market, and haven’t seen any capital gains from this movement upwards. Even better, 48% have no idea that the market has increased at all – and 18% thought it went down over the past three years. Almost have of Americans are completely separated from any wealth creation that has occurred. Their wealth stays stagnant when the market increases, but they feel the pain when the market decreases due to the overall contraction in the economy.

There was a tweet that went viral, coming from an individual who wasn’t invested in the market, but budgeted her finances. She talks about the increase in the cost of groceries, as well as the cost of gas and ends with “How about you ask me how the economy is doing?” 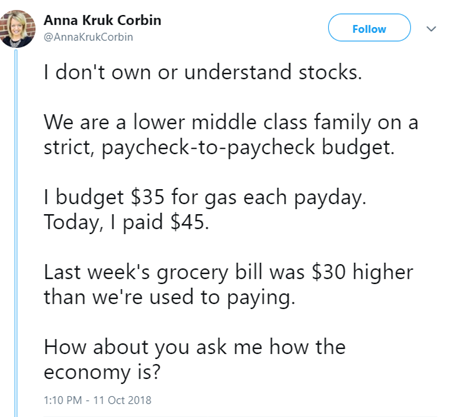 Most people fall into this group, gauging wealth by how much they have to spend after they buy necessities, and measure economic strength by the price of core products. A stronger market tends to mean a stronger economy, but the stagnant wages, tuition and healthcare bubbles, and the lack of savings among the average American in this “Bull Run” era equates to something else entirely.

The average American, across all income classes except the $100k+, have been investing 10% less than they did, on average, over the course of 2001 to 2008. As we continue to watch this trajectory, there are a couple of things we must consider, assuming a similar pattern in declines. 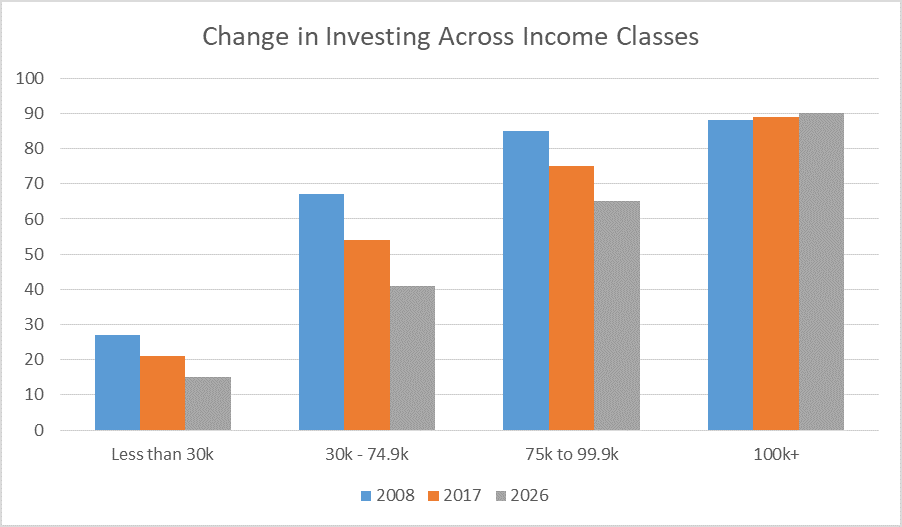 Those Invested in the Wrong Things: The Unfortunate Allocators

There’s also another group that gets the short end of the investment stick: the people who are invested, but they are invested in stocks like GE (down 47.3% YTD), Ford (down 36.9%), or Kraft Foods (down 35.9%). There is a broad population of the more risk-averse investors who didn’t invest in the high-growth tech stocks.

The more “core” stocks haven’t seen much gain over the past several years. In fact, as many know all too well, GE has completely destructed in terms of value. Sears, Macy’s, and other retailers are following a similar path. There are several key stocks that are boosting up the market, and if one has the capital to afford the $2,000 AMZN stock, (or honestly even the $200 AAPL stock), they are able to follow the gains. But with the median savings account balance at $5,200, not a lot of people can take advantage of the outperformers. 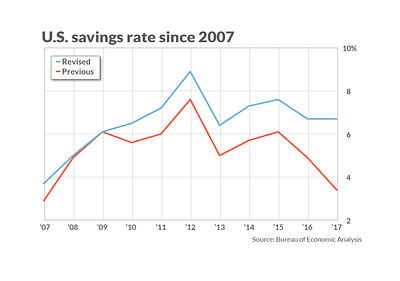 The general investment population is much more likely to be invested in the GEs and the Fords than the Apples and the Amazons. There is a wide gap between the performance of individual stocks and that of the indexes.

The chart below explains this discrepancy among equities pretty well. Apple, Amazon, Microsoft, and Google are leading the charge. They also make up a lot of the in terms of weight in the S&P 500, thus, they have helped to bolster the S&P 500 to the new highs that we have been seeing.

In 2015, the top 5 stocks were AAPL, MSFT, XOM, JNJ, and AMZN – and made up only 10.61% of the total value of the S&P 500. That 3.18% weight difference is a big deal. On average, those 5 stocks make up a much larger portion of the value of the S&P 500, which means that when they do well, the index does well. When they do poorly, the index does poorly. Each dollar movement makes a difference. 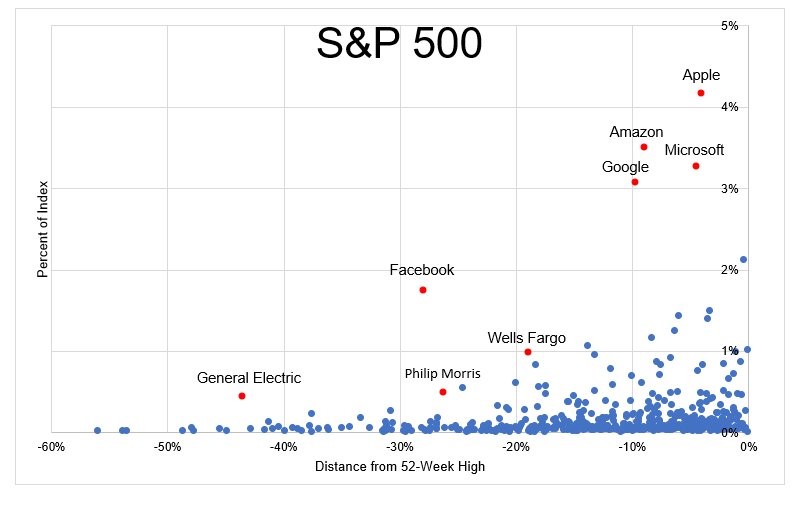 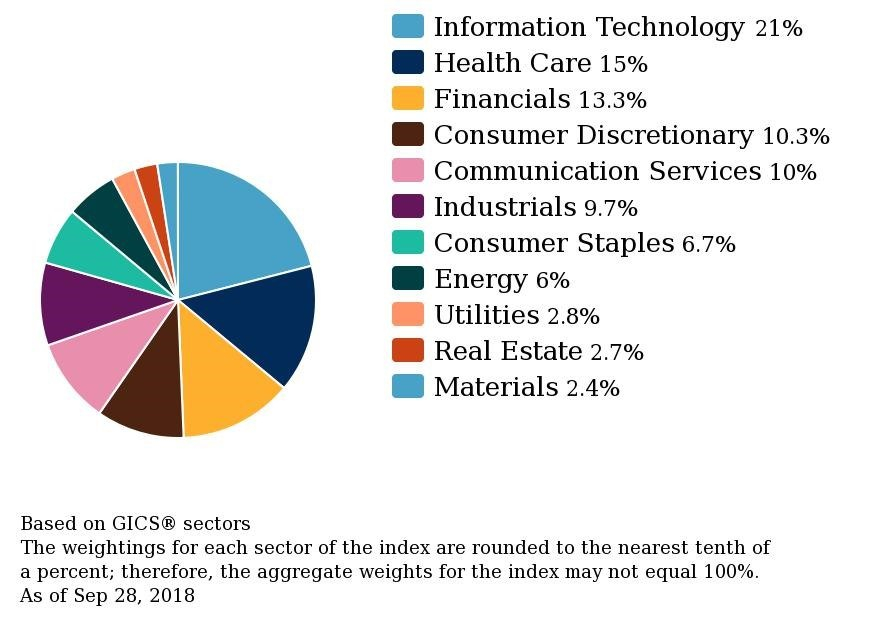 And for those who aren’t invested, they don’t experience the gains at all. Only 20% of millennials are invested in the market. What does that mean for the future of finance? 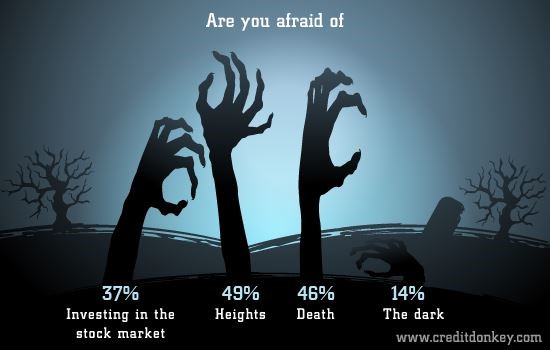 The S&P 500 is not an accurate representation of the overall market. When the average investor is earning half that of the major market index, it cannot be considered a true measurement of stock market strength.

Almost ¾ of Americans think that the stock market is gambling. 80% of millennials are not invested at all. Investing in the market is one of the biggest fears of Americans.

When we look to the future of the investment world, we have to consider these factors. If only 20% of the next generation entering the workforce is invested in the market (versus the 51% of Gen X) that could mean things in the most extreme as a liquidity dry-up or an abandonment of the stock market as a common tool.

If we create indexes that are reliable barometers of the market, encouraging across the board wealth growth and limiting the number of investors that exit because they are discouraged. Underperforming the S&P 500 by 3.07% should not be a persistent investing philosophy.

More than likely, people will shift into investing as they age, but if we can encourage financial education from a young age, that fear will dissipate, and people will begin investing sooner (thus creating wealth sooner). It will help to encourage more sustained economic growth, create softer landing pads during business cycle downturns, and create more transparency.

One response to “Afraid Of The Dark? Why The S&P 500 Is Not A True Measure Of Stock Market Strength”