Eddie Lampert’s Biggest Failure: The Collapse of Sears and The Importance of Corporate Governance

The Rise and Fall of Eddie Lampert

Eddie Lampert was “The Next Warren Buffett” back in 2006. Now, he is the chairman and former CEO of Sears, a company attempting to claw its way back from the retail ashes. How did Lampert, an activist investor, go from creating the “next Berkshire Hathaway” to throwing money into the fire that he created of a former retail giant? Was it systematic, the unavoidable failure of retail? Or was it internal, due to bad corporate governance, controlling the stores ineffectively?

Lampert began at Goldman Sachs in 1984. He left after 3 years in risk arbitrage, creating his own investment company, ESL Investments in 1988. In 2006, he was the listed as “one of the brightest people on Wall Street” in the Time 100, “leading a new class of activist hedge funds”. He had a net worth of $3.1 billion in March of 2012.

Lampert is clinging to a failing company that is falling to pieces, no matter how many loans or lines of credit he extends to the retailer through ESL. His wealth is crumbling into Sears Holdings, with an estimated $2b personal assets invested. His net worth hovers around $1 billion now. The fall of Sears Holdings and Lampert can be contributed to three key things: loss of focus, misallocation of resources, and toxic culture.

Lampert created Shop Your Way back in 2009, a type of rewards program that encourages frequent buying. Lampert’s big goal was to encourage loyalty, but there was also a plan to take customer information and sell it to other companies. The effort on a whole caused store slowdowns at checkout lines, and overcomplicated the usually simple retail process, which drove customers away.

The adoption of a rewards program makes sense: Kroger has Kroger Plus, Kohl’s has Kohl’s Cash, and many other big-box retailers have their own methods to encourage customers to keep coming back. With the advent of e-commerce, a rewards program is entirely necessary to keep the blood pumping in a retail corporation.

But Lampert misread his customers. He was trying to channel to the younger generation, when he should have been focused on Sear’s target market: the older generation that used to get Sears catalogs delivered to their doorsteps, that average 51 years of age. Shifting online to try and capture a market that wasn’t there, turned away the market that was there. Sears will never be an Amazon, and they didn’t need to be.

They shifted resources away from up-keeping their stores, because the return on investment wasn’t high enough in Lampert’s eyes. They don’t have resources allocated towards employees and customer service. Instead, they are transforming into an “asset-light” company, which translates into shutting down the majority of their stores. Their online sales average 17% against their biggest competitors. The company is staring at a blank wall with no exit – they lost their most loyal customers who prefer physical stores, lost their focus on products that were profitable, and have created a culture entrenched in fear.

A Bird in the Hand and Two in the Bush: Seritage & Sears & ESL Investments

But Lampert is positioned to profit regardless if Sears survives. He’s hedging himself against Sear’s downfall extremely well. Lampert created Seritage Growth Properties back in 2015. Sears sold 235 stores to Seritage in its first year, and subsequently rented the stores back out from Seritage. Seritage then takes over the failing stores, with the right to take over half the square footage, and rent it out to other retailers.

Lampert captures that alpha. If Sears closes stores, Seritage takes them over, and rents them out at a premium. Either way, it’s a win. If the Sears store survives, Lampert will benefit. If they fail, he will benefit. It’s smart from an asset manager perspective, but from a corporate governance viewpoint, it’s created cracks in the façade that are irreparable. 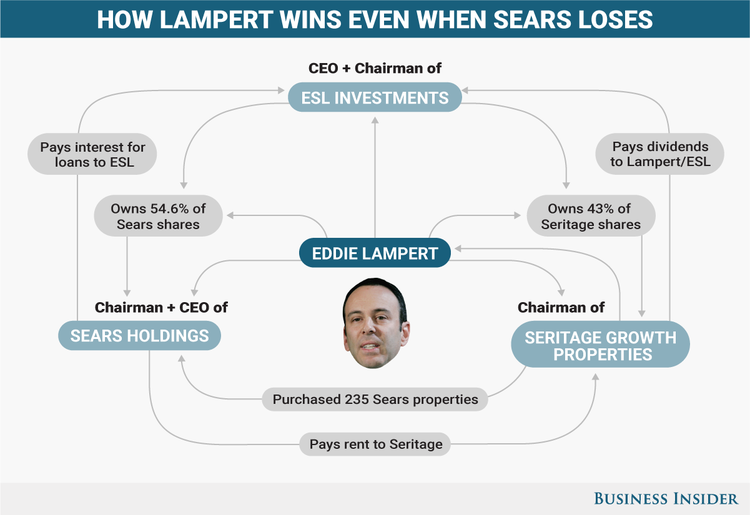 Lampert “fostered a climate of fear” among his senior managers. He phones in from his estate in Florida in over video calls to discuss the company with those at the headquarters in Illinois. His management style consists of calling the shots from over 1,400 miles away, and preventing sustainable growth by constantly taking on new projects and then abandoning them.

We can create all the financial modeling tools that we want to determine the correct pricing on a company and evaluate the data to determine what direction the stock is going to go (and on that note, the data looks pretty dismal).

But there are qualitative red flags that can be just as important. Lampert’s habit of screaming during board meetings and the lack of physical attendance at such meetings is concerning. The turnover among top executives is indubitably not a good sign. Suppliers cancelling their contracts and disrupting the supply chain is a third negative signal. If nobody wants to do business with you anymore, are you even a business?

Lampert noted in a May 2018 Chairman Letter that his confidence in the company “lies in the commitment of our associates, day in and day out, and the value of the company’s brands, services and convenience”. With stores closing and most of the company brands being sold off to other retailers (Kenmore, Craftsman etc.) or outsourced through Amazon, Lampert’s confidence must declining alongside it.

Sears was a constant throughout generations, through Allstate Insurance, Discover Credit Card, the Sears Tower, Kenmore Appliances, Craftsman Tools, and several other operations that have become integrated into the daily life of many Americans. But they lost focus too many times – they forgot their target market, their target products, and rolled out strategies that didn’t make sense for the company.

Lampert’s governance was one of the biggest drawbacks of the success of the company. He cut off its air supply by isolating it from those key customers, and fed it a steady diet of cost-cutting techniques that only ended up cutting into profit. With vendors jumping ship, the Chapter 11 Bankruptcy declared October 15th will only add momentum to the downfall.

The Evolution of Retail

Everyone knows that Amazon is a behemoth that cannot be tamed. But does their success really mean that retail is gone forever? Companies like Kohl’s and Walmart have evolved to overcome the shortcomings that ran Sears and Kmart into the ground.

Kohl’s actually has Amazon departments within its physical locations, and has leased out some of its stores to groups like Aldi’s to save on rent. The company’s stock has been trending upward for the past 6 months, and has climbed up from $37.9 to $76 over the course of the year. Target and Walmart have followed a similar trajectory, posting a 67% and 35% return peak to trough, respectively. Adapting to the changes in the retail environment, a willingness to truly collaborate, and a sense of humility are what saved these retailers.

Sears Holding now trades for $0.20. Cited as the “the longest-running corporate liquidation in history”, the fall tells a tale of the importance of corporate governance in determining the success of a company. It shows how 125 years of business can be shattered by bad decisions and bad culture.

Either way, Lampert will emerge fine due to essentially hedging against himself, but the company is almost at rock-bottom. Lenders will have to be gracious to the retailer in order for it to emerge unscathed. However, things are more likely to head south, 68,000 people will lose their jobs, and the company that used to be the everything store will soon be the nothing store.

When investing, it is important to pay attention to net income and revenues and growth, but it is also important to pay attention to how the company is being managed. Things can only be dragged along for so long, until they get stuck in the dirt. However, a combination of qualitative and quantitative weakness spells bad news for Sears Holding Corporation. At this point, it’s not even worth the short.

Other retailers like the ones listed above have shown relative strength, and should continue to do so into the holidays. Kohl’s is positioning itself well for continued success with strategic planning and smart partnerships. The CEO has embraced a ‘mindset of experimentation’ that has paid off. The company has a beta less than the market at 0.71, and with a PE Ratio of 13.43 it should have room for continued growth in the future.