Under Armour: The Importance of Performance

The story of Under Armour seems to be the classic entrepreneur fable – football guy lives in his grandma’s basement, selling shirts, and makes it big with an ESPN the Magazine advert that delivered $750,000 in sales within a year. Ten years later, the company reaches $1 billion in revenue, and has a top spot in the industry.

Under Armour has evolved over the years, from a specialized shirt company that focused on a performance wear into a global brand that produces everything from hats to socks to backpacks. Partnerships with top athletes, overseas growth, and a reach into “digital fitness” provides the company the foundation to be successful – but lately, they have been floundering.

Everything from delivering lackluster forecasts in a rather mediocre five year plan to employees expensing strip clubs to entertain athletes, to key management departures have caused the company to lose billions in value over the past two days. Looking at either the Class A stock (UA) or the Class C stock (UAA), the story is relatively the same. UA is down 29.59% and UAA down 35.06% over a two-year time frame, with a over one-third of that drop happening in the last day.

Kevin is a key component of Under Armour. A former football player, the founder, CEO, and chairman of Under Armour, started the company with the plan to create an athletic shirt that was actually breathable. He bootstrapped, developing prototypes, and sending out the product to former teammates. The products picked up, first with outfitting feature films like “Any Given Sunday”, and then with an ESPN the Magazine advert that subsequently drove deals with Division I athletics and professional sports teams.

Plank’s status as a former special teams captain gave validity to the product and his network propelled the company forward. In 2005, the company went public, doubling on its first day of trading. From 2006 – 2010, the company had an impressive list of athletes wearing its clothing, securing Michael Phelps, Tom Brady, Ray Lewis, and, Georges St-Pierre among others. The company constantly pushed the idea of innovation, rolling out products like Armour39, a performance monitoring system. They became a partner of the Tottenham Hotspur in 2011, marking their move internationally.

More recently, the company has added Misty Copeland, Steph Curry, and Jordan Spieth to their athlete roster. Innovation continued, with the first “smart shoe” and the UA Health Box. They inked a deal with Major League Baseball. They purchased two of the biggest fitness app companies in the business – Endomondo and MyFitnessPal.

They have their immersed in several different parts of the overall industry. They have the tough-guy football image as apart of their brand identity, but as the space evolves, this image gets less and less attractive. They will have to redefine who they are to consumers, which is a flight risk. They have significant headwinds as well, including competition, loss of market share, and failure to follow trends.

Innovation: Data is Only Power if Used Correctly

Plank is aware of the broad market available in the digital fitness realm. In 2013, the company acquired MapMyFitness, and a year later, acquired MyFitnessPal and the international personal-training app Edomondo, as part of an effort titled “Connected Fitness”.

The apparel the company produces is in itself a technological revolution. At the company’s “innovation lab” there are prototyping rooms, weather chambers, and 3-D printers, to name a few. And they can use the data gathered from the fitness apps to see how their users are using the products, which helps the company decide how to produce new products.

It makes it that much easier to tailor products to consumers. If the data say that the average person runs 3.1 miles, then the company can design a shoe that handles exactly that workload – which is exactly what they did with the Speedform Gemini.

But with competition coming from Google, Apple, and FitBit, and the emergence of several health fitness startups, it will be hard from Under Armour to remain relevant in this field as well. In each of the spaces outlined below, the competition grows everyday. Under Armour is definitely making strides, but competition is fierce.

With regards to apparel, athleisure is the new direction of the industry. The trend posted a 16% increase in sales year over year as compared to apparel sales rising a mere 2%, and sales are projected to increase to $350B by 2020, so hopping onto this movement is important for the growth of any company in the industry.

Also, it’s not so much a general trend either, as athleisure is evolving to match the lifestyle of the millennial generation. As workplace dress codes relax, there is more room for athleisure to break into the corporate world. The health consciousness of Millennials also makes them more likely to seek out products that can be worn both in and out of the gym.

The competition in this realm is tough. From boutique labels, to big names like Nike, everyone is trying to enter the space. The “Other” in the graph below is composed of  “Pure Play” brands that simply sell athleisure, like Lululemon, Athleta (owned by Gap), and Sweaty Betty. There have also been celebrity collaborations that have defined the direction of the trend, from Beyonce and Topshops partnership, to Kayne West and Adidas.

It is no secret that Nike dominates the field. They sponsor the top athletes, their clothing is coveted, and they enter into new spaces at breakneck speed. Athleisure is the direction that the industry is going, and Nike, Adidas, and Lululemon were all there first to this $44B market. Under Armour barely exists within the space.

Losing Traction Even Outside of Athleisure

Under Armour is still two steps behind, and is losing traction in all the spaces that they used to dominate. Even in footwear, they only have a 2.5% market share, which is not enough to sustain a spot as an industry leader.

People have no interest in purchasing the shoes that Under Armour produces. The sample size in the survey below is small, but it was sent out to college students, who make up a broad component of Under Armour’s target market. Only 18.1% of people would even consider purchasing a shoe from Under Armour, which isn’t promising for the direction of the company. It is telling of the effort that they will have to make to regain market share in not only this part of the industry, but the industry as a whole.

Breaking Out Internationally: If the Shoe Fits

Under Armour has stated several times that they expect much of their growth to come from abroad. With 21.7% of their revenues coming internationally, there is definitely room for growth, but the company is getting in its own way. The shoe problem, coupled with narrow product lines and high prices, are going to prevent them from being successful at this endeavor.

With Adidas originating from Europe and Nike already having a very strong international presence, the barriers to entry for Under Armour are high. They are not producing the products that are preferred domestically, nor are they producing the products preferred internationally. They are going to have to re-evalute this tactic, and reshape how they think about sportswear in order to gain back market share.

The company is entering into a $210 million restructuring plan. They cut 3% of their total workforce, redesigning operations to be more efficient, and seeking out cost saving tactics. However, the restructuring is taking longer than anticipated, and the cost has been revised upwards twice since its inception.

The company’s gross profit has been increasing steadily, and revenue was up 2% for Q3 2018.  North American revenue declined by 2%. Their international revenue increased 15%, moving up to 24% of total revenue, which is extremely promising, but still not enough. The company expects revenue to continue growing in the low single-digits, which is not great. The growth abroad is offset by their operating losses in those countries, which negatively impacted their net income year-to-date.

Compared to the rest of the industry and the company’s own history, Under Armour is expensively priced. Looking at forward 12-month EPS estimates delivers a multiple that is 4.5x that of the industry average of 14.3x and 2.5x that of Nike. Trading at 63x earnings is concerning for any company, and should be a red flag for investors. 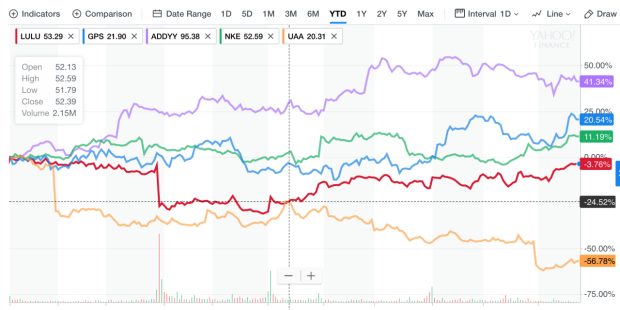 Year to date, the stock is down much more as compared to competitors. That means there is room to the upside, but Under Armour needs to figure out what direction they want to go in, and how they are going to make up for lost time. They definitely have promising results so far internationally, even without being in a leader in the shoe market, but maintaining those results will be challenging. The room for growth is there, but only if they act strategically.

Plank has been CEO of Under Armour since 1996, a 22 year tenure that dwarfs the 7.2 year average for large-cap CEOs. The business is struggling, even as competitors such as Adidas, Nike, and other athleisure companies outperform. Under Armour is maintaining focus on the “performance” side of the industry, which is quickly losing steam as a trend.

It’s always a good idea to operate within a competitive advantage, but as Puma breaks into the football market and New Balance makes strides within baseball, Under Armour is being attacked from all sides. The edge that they had within the professional sports realm is diminishing, and they have no path into athleisure, which is where the industry is heading.

They are also going to need to reign in the nonoperational aspects of the business. Management departures and expensing strip clubs really are not a great sign of business success. Keeping in line with customer expectations and strong leadership will be important to the company’s future.

They don’t have the shoe market, which will could impact their international sales over time. They have a big focus on tech, but competing with seed-funded boutique firms will prove to be challenging. Inserting their products into discount retailers like Kohl’s and Famous Footwear could provide some alleviation from the downward pressure, but they need to consider a total overhaul of their plan.

The stock has been extremely beat up over the past few years, but even still, they are trading at a high valuation. The company is making the right effort, but it seems misguided at times, and out of line with how the industry actually operates. With an expensive restructuring plan and weak future guidance, the company will have an adjustment period for a while. In the next 2-3 years, with a modification of tactics and more efficient operations, the company could climb back up with the other giants, but that will be a long road to success, and probably isn’t worth the ride.