It is Just a Cycle: Reversion to the Mean

Following the Fed Trend: Always One Step Behind

The Fed hiked rates recently in a move that left markets reeling, and with the President attempting to fire Jay Powell, the Fed Chairman. The Fed moved the target range of the feds fund rate to 2.5% in the fourth hike of 2018. This number is still historically an extreme low. The rates haven’t even approached pre-Financial Crisis levels.

With lowered projections for future hikes, down from three for 2019 to two, the FOMC doesn’t have a lot of room to cut rates as a part of their Recession tool box. If they hiked two times next year, rates would only be at 3%. As shown in the table below, rates are normally cut by an average of 7 percent when we enter into a Recession. In the most recent Recession, rates were slashed all the way to zero, where they stayed for 4 years, until the first rate hike in 2015.

With rates now at a target of 2.5%, the Fed would have to go negative to match the moves made in 2008. Consumers would have to pay to keep money in the banks, which would further exacerbate the saving problem that America already has. The market did not respond well to the most recent hike, despite more cautious wording from the FOMC.

With the major indexes weaving in and out of correction territory, the market is not sure what to do. There has been carnage over the past month within the stock market, and volatility is at relative highs. Investors are showcasing fear. However, if we enter into a correction, that is not necessarily a bad thing.

The Year of Cash

As an indicator of how tough of a year it has been for equities, cash went from being one of the worst performing assets in history to the best performing asset for 2018 thus far, delivering a 1.8% return. Treasuries are second with a 0.3% return.

With cash being the best investment of the year, it becomes important to examine the future direction that the market is expected to go, as people think about their asset allocations. The Fed believes that economy will be strong into the coming year. A strong economy has historically been promising for equities, as show in the graph below. But what are investors feeling?

Five different indicators are telling of how investors are feeling: the put-call ratio, the ISEE, Relative Strength Index, and consumer sentiment indexes. Each of these tell a story, but they also have carry a lag effect. When these indicators become concerning is usually when the market has already priced in that fear. However, it is important to consider them in an overall examination of market movement.

People are scrambling. They are buying puts at high levels of premium to hedge against what they perceive could be a massive down turn in the market. The amount of puts being purchased is near all-time highs, matched only by numbers in March of 2009. This is a huge rush towards protection, signaling that the market could be oversold. The fact that the put-call ratio is above 1, currently hovering around 1.8, shows that investors are extremely bearish. 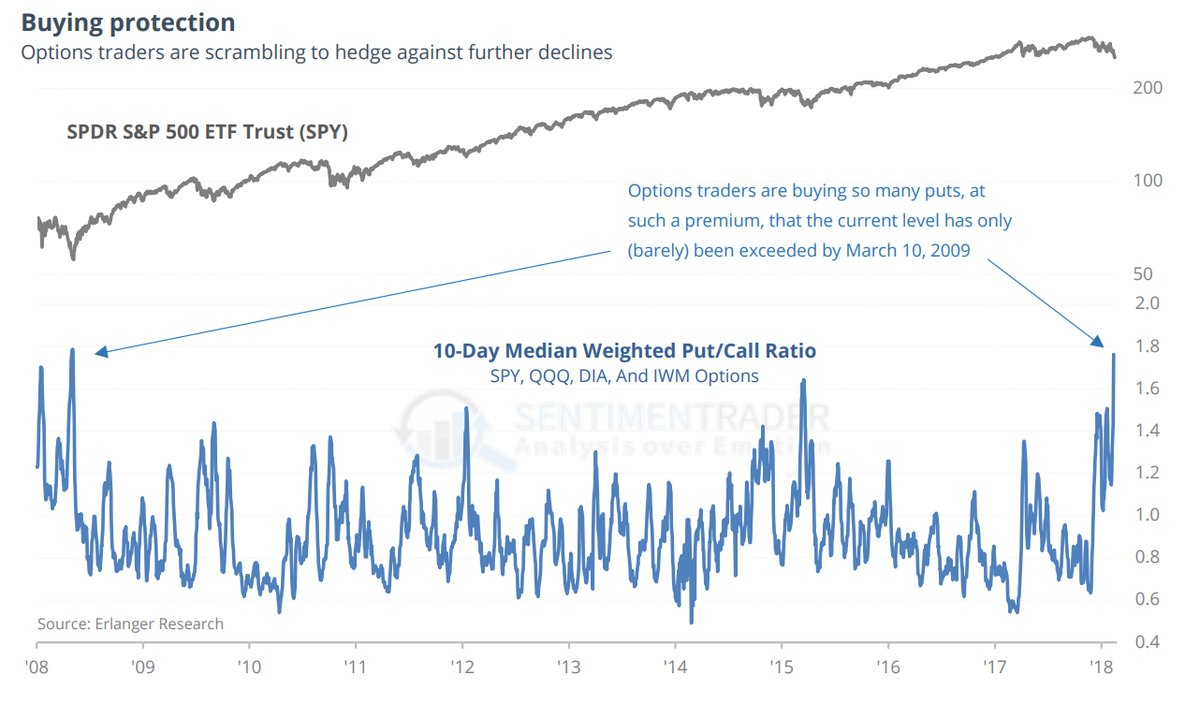 Another indicator, the ISEE Sentiment Index, is telling a similar story. In this metric, the lower the number is, the more bearish the indicator is, and only retail customer purchases are included. The 50 DMA is at 90. The median value since September of 2008 is 101, with an interquartile range from 85 to 120 for the same time period. The range since the beginning of 2018 has been between 84 and 114.

With a value of 137 today (12/26/18), and we just popped outside of the third quartile in an extremely bullish fashion for the past ten years and the past year, posting the highest call-put ratio since the beginning of the month. There is a massive tug of war between the bulls and the bears, according to the movement within this ratio.

According to the Relative Strength Index ratio, the market is quite oversold, with this metric hovering around 28. Historically, the market is considered oversold when this number dips below 30, and overbought when above 70. However, the market can remain quite oversold for a while, and could take time to regain its previous momentum. Or it could take little-to-no time. After all, as John Maynard Keynes says, “the market can remain irrational longer than you can stay solvent“. 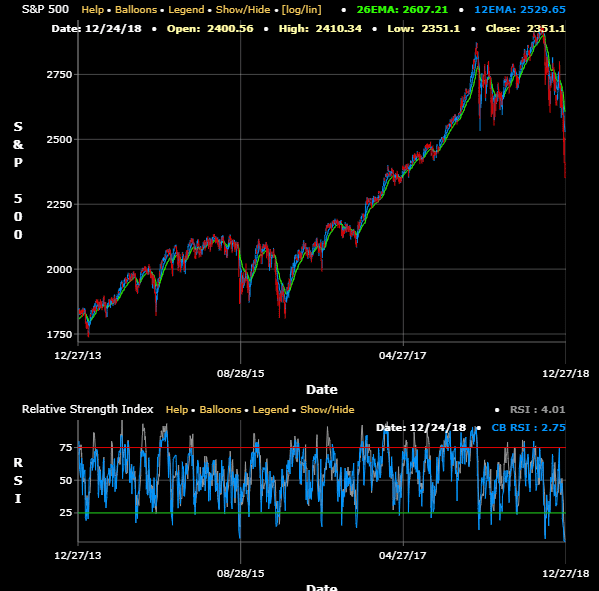 The Fear Index and The Percentage of Bears

The Fear Index and the percentage of bears are both up. Bullish sentiment is very low. Bearish sentiment is very high. The historical average for bulls is 38.5%, which is currently hovering around 24.9%. The bears account for almost half of all investors, up 17% from their historical average. However, according to AAII, when this divergence happens, higher-than-median returns for the S&P 500 Index tend to follow.

People are nervous, and for the first time in a while, that is what is driving the market. For the past few years, investors have been overzealous and overconfident, but now, anxiety seems to be the markets guide. Scared money tends to make many mistakes. 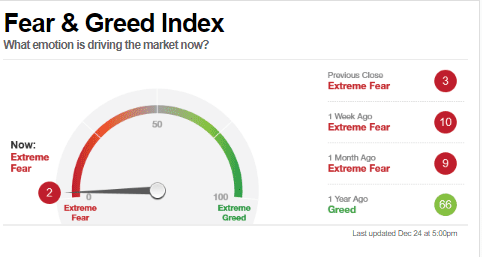 Volatility: It Really Isn’t That Extreme

Finally, the VIX is up, bouncing between 30 and 35 for the past week. It is up almost 300% from 2018’s low of 8.92. If you told any investor that you were long volatility a few months ago, it would have been laughable. Now, it would been quite the trade. 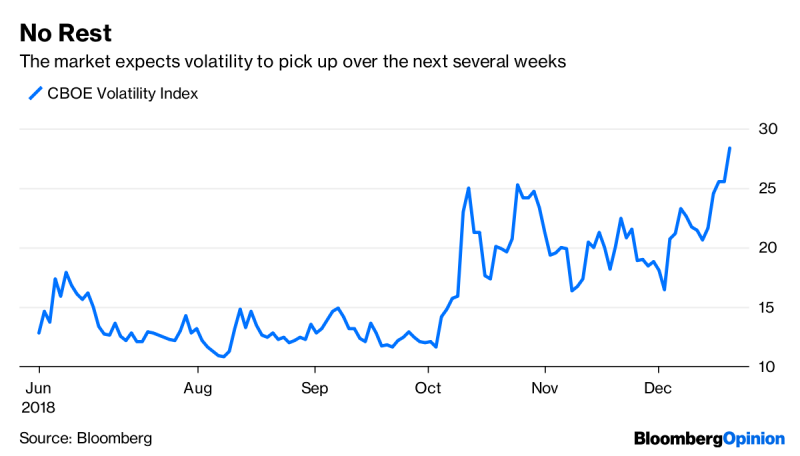 For the next 6 months, VIX futures are priced in over 20, according to the chart below. The market could be pricing in a bigger down-move in equity prices with these relatively high future estimates in the VIX, but these cycles are to be expected, especially considering the suppressed levels of volatility over the past few years. The market moves, and we should let it move.

How the Market is Responding

The S&P 500 and the Dow are down 15% from September highs. Only 18% of stocks are above their 200 DMA. We saw something similar back in early 2016, and stocks went on to bounce back to all-time highs. However, keeping history in mind, this drawdown obviously isn’t as extreme as the -50% we experienced during the Recession. But it is a painful drop, and one of the worst Decembers that the market has seen in a while. 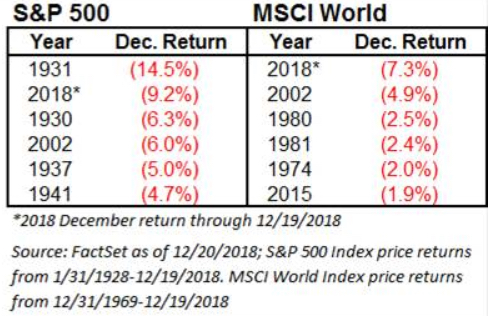 Calm Down: It is Just a Cycle

There is a lot going on in the world, with geopolitical tensions, economic weakness overseas, government shutdown, supply chain uncertainty, and trade confusion. We cannot expect the market to continue to always go up in the face of such uncertainty, nor can we expect volatility to remain at all-time lows. The indicators discussed in this article give a glimpse into how investors are responding to a downturn, and it isn’t pretty.

Good returns are great. Seeing a double-digit return in a portfolio at the end of the year is an incredible feeling. But understanding that the market must recover is something that goes with the territory of investing. Nothing can last forever.

There is so much nervous money in the market now. It is important to understand that down days are normal, and are to be expected. The market cannot continue on the upswing forever. It has to take a breather, and take a break. It does not mean that it is fundamentally broken.

Artificially pumping returns with share buybacks and excessive liquidity injections will only make the up days better, but they will also make the down days worse. Letting the market swoon and sway is how it heals. The Law of Large numbers tells us that it will always revert to the mean. It will not continue down, or accelerate to new highs, forever. We cannot continue pushing it to extremes, or else it will explode.

The Fed has to hike rates, and they must do so from information gathered from past data. No one can predict the future. The Fed is in charge of managing the economy, not asset prices.

Cycles are a natural part of existence, and the stock market is simply potentially entering a down cycle. Investors should think about holding onto trades that are core to their investment philosophy, or moving into gold or t-bonds if their nerves are frayed.

However, what the above chart showcases is the reward of patience. Holding a basket of stocks over a long period of time delivers stellar returns. Stocks tend to have an upwards drift, and that enables the possibility of long-term returns. The day to day can be unpredictable, as it has been recently, but long term, we can expect stocks to move up. 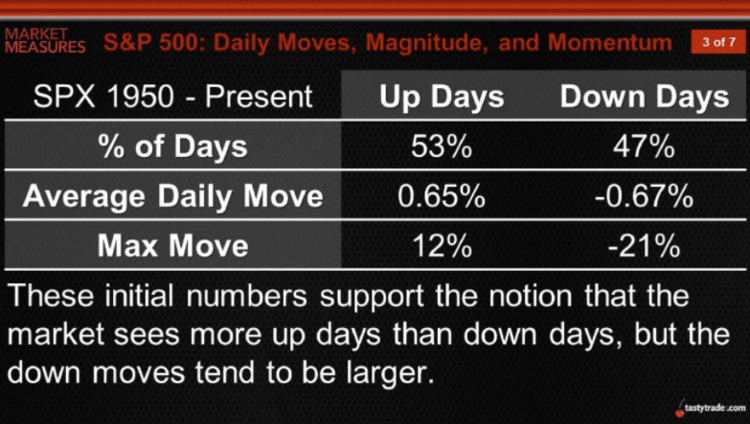 Finally, as more and more people come up proclaiming the risk of a recession or prolonged correction or the potential for a massive move upwards, it’s important to remember that investors are inherently irrational. Price changes are fat-tailed and correlated with a multitude of variables.

And year end price targets are almost always wrong. Over the past thirteen years, the average miss has been 10.7%. People want to know what other people think is going to happen to the market. The average price target for the S&P 500 at the end of 2019 is 2974, which would be a 568 point, or 24%, increase from the current 2406 level.

We cannot predict the future, yet. But we can do our best to read the data and make predictions that align with our personal risk-reward profile. Paying attention to indicators is important, but they carry a relative lag effect. Paying attention to reversion to the mean is also important, and considering the relative movement of the S&P 500 against the rest of the world tells an important story, as nothing can truly go up forever. International has a lot of room to the upside, and with the returns of EMs over the past year, they could be posed for a good buy soon.