The market has been on a wild ride recently, with extreme swings up and down that has left the most seasoned investors weary. It has been showing some signs of weakness for a while, and ended 2018 in the red. There are several things that deserve further analysis, and could tell us the direction that the market is going in the upcoming year. Two of the most important things to pay attention to is the dry-up of liquidity, led by the shift from active investing to passive investing.

Donald Trump is one of the people that called the illiquidity in the market in the middle of December, in a tweet that also accosted the Fed for raising rates. His statement basically said that the Fed continuing to hike rates would lead to a dry up in market participants. With the Fed now “listening carefully” and a direct conflict between the recent upbeat jobs report and the newly released manufacturing and mortgage numbers, there is confusion about the exact direction the Fed will go.

A few weeks ago, Treasury Secretary Mnuchin assured investors that he and the heads of the six largest banks “continue to see strong economic growth in the U.S. economy with robust activity from consumers and business“. Mnuchin also announced that there was “ample liquidity” in the markets for lending, less than a week after Trump’s liquidity tweet. However, the stock market is not the economy, and bank liquidity is not market liquidity. 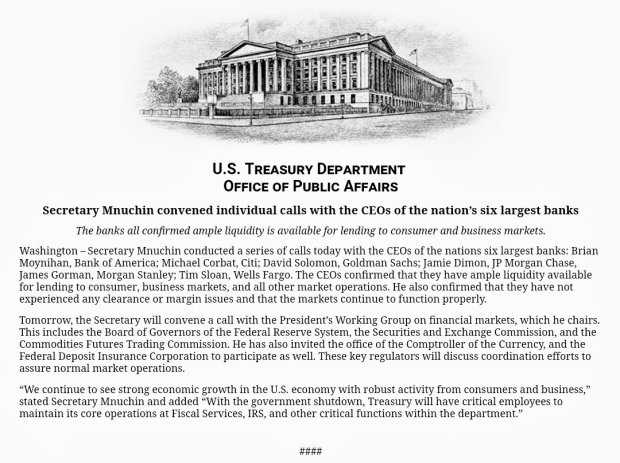 Regardless of what the Fed chooses to do and Mnuchin’s reassurances for the economy, there is not ample liquidity in the market. Measuring the difference between bid and ask prices for the S&P 500 E-mini futures, single stock liquidity has contracted 42% over the past year. The number of contracts of S&P 500 futures have tightened by 70%, according to research by Goldman Sachs. This liquidity dampening process has several key implications, including potentially causing spikes in volatility.

A lack of liquidity in the market will push volatility up in the long run. In fact, the more recent spikes in volatility are more than likely interconnected to this dry-up in liquidity. The CBOE Volatility Index averaged 16.5 for 2018, compared to 2017’s 11.09 average. Right now, the VIX is bouncing between 25 and 35, despite dipping down to below 25 for the past few days.

If the market enters into another sell-off, more and more people will take their losses and get out, which reduces overall trading volume. When liquidity disappears, the price swings tend to be more volatile because there isn’t a cushion of buyers and sellers there. It takes less and less volume to move the market either way, amplifying each swing.

The graph below shows the market depth of E-minis over the past four years. The average number of contracts has been steadily decreasing since 2014. The annual average has compressed over time as well. The contraction in total available liquidity is highlighted by the prevalence of machine trading. 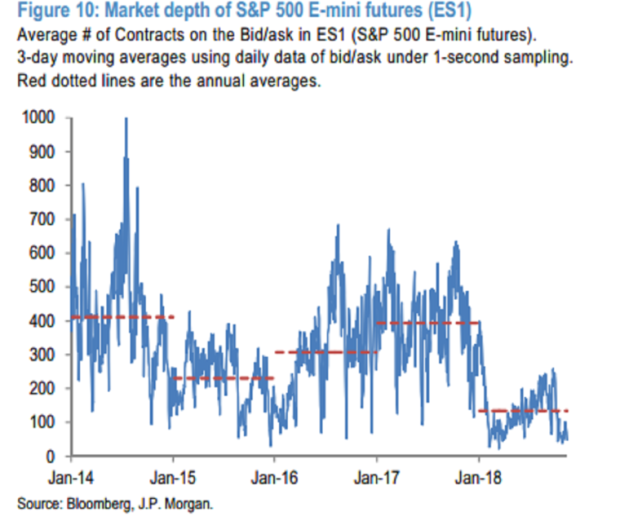 Most investors are aware that the market is relatively tense right now. It’s bouncing around in a more volatile fashion than usual, and continues to do so. Some blame machines, others blame human error.

High frequency trading (HFT) techniques and algorithmic trading have never really truly been tested in a bear market. If the machines end up backing out based on sell signals, that will further tighten liquidity, and push volatility further up. And the market relies on HFTs to provide an ample amount of liquidity. But is all liquidity necessarily good liquidity? A point made by Marko Kolanovic of JP Morgan is that:

“The most important driver is likely the increase of volatility (e.g. VIX), given that many market making algos (as well as business models) were calibrated during the years of low volatility”

That means that the algos aren’t sure how to react to spikes in volatility, like we saw back in February of 2018, which was caused by liquidity compression. The day that the VIX had its largest spike in history, the bid-ask depth at that time was half of what it was a  month prior. The week of January 29th, the week before the VIX shot up to new highs, was the worst week for bid/ask depth in recent history. That means the market was extremely vulnerable to shocks, and vulnerable to pull-backs, because there was nothing to cushion a fall.

The HFTs do take exit opportunities, and not at the best times. The charts below show the movement of HFTs after a news announcement, with participation declining 50% ten minutes before, to 33% during, representing a total drop of 70%,on average, anytime a news announcement happens.

There are several reasons for this, most notably the fact that machines cannot yet truly process the complexity of some news pieces. So when a policy change announced, the machines might pull back liquidity, without exploring both the positive and the negative that the said policy change might have. 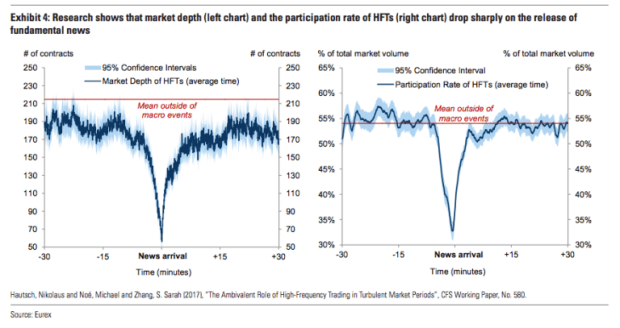 The whole thesis is that having “machines” within the market, makes the entire market more fragile and more vulnerable, especially in times of stress. And the growth of algorithmic trading cannot be denied, especially considering it delivers 70% of the daily trading volume of the market.

The Shift from Active to Passive: Risk Aversion

The shift from passive to active investing has really taken shape recently, spearheaded by the introduction of index funds in 1970. Since then, growing evidence of active underperformance and the lower cost of passive investing entices more and more investors to throw their money into an ETF or mutual fund. 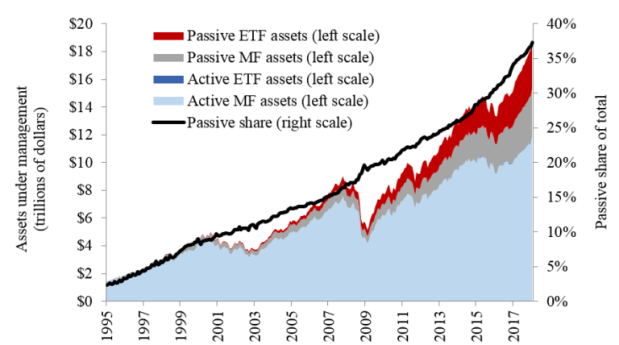 This shift from active to passive effects liquidity, enhances volatility, and furthers concentration of the industry. A passive fund carries relatively less risk. When the market gets volatile, passive funds are going to be less exposed to capital withdrawals because people are simply more likely to keep their fund within that vehicle.

As shown in the graph below, passive funds tend to be less reactive during times of uncertainty, which enhances overall financial stability. However, volatility is amplified primarily because of the lack of reaction and the subsequent lack of cash, as managers still have to rebalance if the market moves, even without investor inflows.

Given the lack of inflows, passive funds tend to be more illiquid. The funds that investors purchase must maintain a higher cash balance in order to balance out the potential of a liquidity squeeze. This also means that a more illiquid fund is going to be more volatile, simply due to the same feedback loop that was described above.

The ETF Space and the Concentration of the Industry

Mutual funds still dominate in terms of investable assets in the passive space. ETFs only make up approximately 19% of total assets, with mutual funds dominating. However, ETFs are growing at a clip of 16.5% year over year versus the 2% growth rate for mutual funds, so that gap will continue to shrink over time. 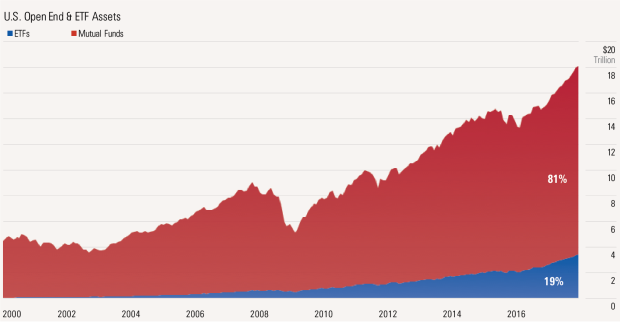 This shift also results in consolidation in the industry, with increasing concentration among the top fund managers, with the top two taking 81% of new investor dollars in 2017, which is not necessarily a bad thing. However, more often than not, passive managers tend to be more concentrated than active ones, which could create some index-inclusion effects, such as increased volatility and dampened liquidity.

The Herfindahl-Hirschman Index (HHI) as a measure of market concentration has across combined active and passive funds has increased to reflect this. The lack of diversification of investor funds does pose the problem for a big event to essentially wipe out the assets of one firm, which would most definitely reverberate across the industry, and put us right back into that endless feedback loop. 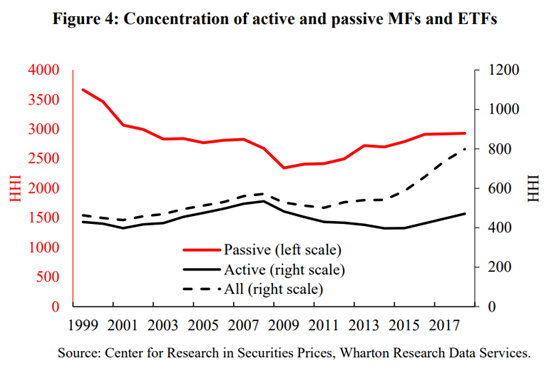 The decline in liquidity in the market is concerning, and something that is paid attention to over the next year, coupled with the effect that the shift into a passive investing style will have on the future. Dampened liquidity results in more volatility, which results in essentially an endless feedback loop of the two.

The economic direction of the United States is more uncertain than it has been in a while, with conflicting economic data and a relatively nervous Federal Reserve. The fact that the Treasury Secretary saw it necessary to publicize an official statement regarding liquidity can be interpreted as a sign that liquidity is very much not fine.

The shift into passive investing style means that funds can be insulated from day-to-day volatility, but are exposed to the problem of illiquidity and increased volatility in times of uncertainty. There is a process of fund concentration occurring in the passive side of fund management that leaves the entire industry exposed, simply due to market concentration.

When looking at investors’ top concerns for the year, a slowdown in the economy is number one, coupled with trade tensions, the end of the bull run, and tightening monetary policy. I would argue that quality market liquidity needs to be on this list as well, beyond that of the concerns of index investing.

The entire process is a giant circle. The switch from active to passive has dried up daily volume, and has left the markets more reliant on HFT liquidity. The reliance on HFT liquidity has yet to be truly stress tested, and could be troublesome, as we’ve seen in the volatile swings over the past few weeks. If HFTs exit the market, then liquidity dampens even more, volatility spikes again, and the passive funds are put to the test.

Neither passive investing or HFT is inherently bad. Both arguably are very good things. But when it comes time for a correction, the entire market is extremely exposed. With a loss of a liquidity cushion, that correction could become even more extreme than we expected.